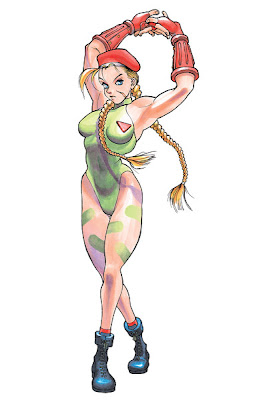 Cammy, also known by the full name Cammy White and the codename Killer Bee (in Street Fighter Alpha 3), is a character in the Street Fighter series. She first appeared in the fighting game Super Street Fighter II, which was released in 1993, as one of the "New Challengers", out of the four new characters introduced in that title. She is the second female character in the Street Fighter series, following Chun-Li. Out of the four New Challengers, Cammy is by far the most prominent, having many more game appearances than the others, as well as more appearances in games and other media than many of the original "world warriors". Along with Chun-Li, and most recently C. Viper, Cammy's considered one of the Femme Fatales of the Street Fighter universe, her popularity quickly making her one of the most famous characters, because of her attractive and slender figure along with her strong personality and fighting skills.

Cammy is a quick, close range fighter. She lacks any projectile or long-reaching attacks, and therefore hurls herself at the enemy relying on speed and priority. For example, her standing hard punch can often cancel an opponent's attack outright, if it connects. Priority such as this makes her one of the easiest characters to use in Capcom vs. SNK 2. Her original incarnation in Super Street Fighter II had trouble evading projectile attacks, so later incarnations involved reworked and additional special moves to evade fireballs with ease. Cammy's early history is unknown; her first appearance in the Street Fighter chronology was Street Fighter Alpha 3, where she was a soulless Doll sent to assassinate Dhalsim. Dhalsim used his spiritual powers to make her self-aware, and she realized that Shadaloo was controlling her. M. Bison sent Vega to observe her. When Vega confronted her, he revealed to her that she was an "experiment" and was no longer needed. Vega intentionally lost a battle to her, and she wondered why Shadaloo wanted to destroy her, since she had never committed any altercations against them. She later encountered Juli and Juni, two other Shadaloo Dolls, who lacked the benefit of self-awareness. When Cammy confronted Bison, he told her that she was meant to become his next body, after his current physical manifestation was destroyed by his own Psycho Power. Cammy managed to break the twelve Dolls free from Shadaloo's mind control, and they confronted Bison together. He explained to Cammy that she was a clone of himself who possessed a small portion of his Psycho Power, and that if he were to die, she would die as well. Cammy fought against his psychic probing and rescued the Dolls from Bison's control with the Psycho Drive. Cammy got the Dolls out the Shadaloo base and then fell unconscious, no longer a clone, but an independent human. Vega rescued her before the base was destroyed, not wanting to allow a beautiful human to die. He deposited her on the doorstep of the British paramilitary government organization Delta Red.
Posted by bluedreamer27 at 8:58 AM