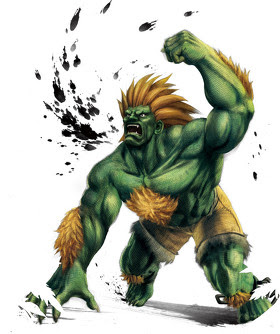 Blanka is a video game character from the Street Fighter series of fighting games. Blanka has green skin and long orange hair. He is a native and believed to be a monster by many. Blanka's first appearance in the Street Fighter series was in Street Fighter II. His prototypical name was "Big Dean Caves." Blanka was originally going to look more like a caveman and there are rumors that the design for King Rasta Mon from Saturday Night Slam Masters was one of the early Blanka character models. In Street Fighter Alpha 3, his character design was again changed to make him less ferocious-looking. 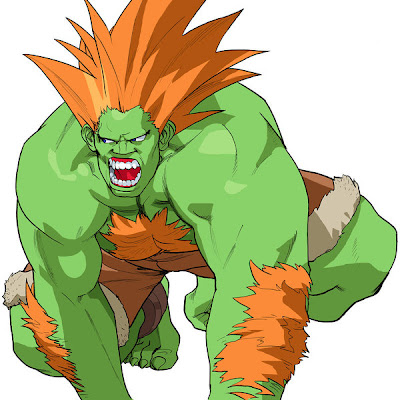 Blanka's most apparent characteristic is his green color. His in-game storyline states that he was once extremely pale and was once known locally as the "hombre blanco" (white man) and adapted the blanco into his name Blanka. This is a strange storyline point because the language spoken in Brazil is not Spanish but Portuguese (in which that expression would be "homem branco"). His green skin color in the games is attributed to his constant use of chlorophyll from plants to better blend in with the jungle environment, a color change that eventually became permanent. His coloring changed in later games, making him bright green with vivid orange hair as opposed to the yellowish green skin he had in Street Fighter II. Blanka's style of fighting in the games is a self-taught savage fighting style; however, Capcom's USA division depicted it as a Capoeira technique.
Posted by bluedreamer27 at 8:47 AM