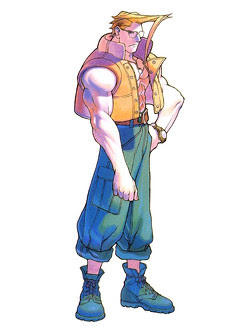 Charlie Nash, usually called Charlie in English and Nash in Japan, is a character from Capcom's Street Fighter series of fighting games. He is first introduced as a playable character in the original Street Fighter Alpha, but was already part of the series' backstory since Street Fighter II. Charlie is a first lieutenant in the United States Air Force. Charlie is first mentioned by name in the Street Fighter II storyline (first released in 1991), where he is the deceased war buddy of Guile, one of the playable characters in the game. In Street Fighter Alpha 3, Charlie sacrificed His own life in order to kill M. Bison but he had no success, Bison's soul went to Rose's body making her his temporary host. In the game, Guile enters the World Warrior tournament with the purpose of avenging his fallen friend's death. In Super Street Fighter II Turbo, a scene is shown of Guile visiting Charlie's grave. 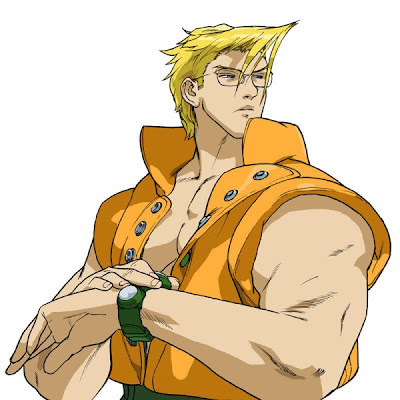 Charlie wears green cargo pants and a light Yellow flack jacket. He has glasses which he takes off before a fight. He has an exaggerated hairstyle consisting of a large forelock of blond hair. This outfit (minus the forelock) is also Guile's alternate costume in Street Fighter IV. The Marvel vs. Capcom series provided a twist on Charlie's fate. In his ending for X-Men vs. Street Fighter, Charlie is captured by Bison, who performs terrible experiments on him. Charlie's fate would be left up in the air until Marvel Super Heroes vs. Street Fighter, where a secret character by the name of Shadow appeared. Shadow was a palette swap of Charlie, with nearly his entire body blacked out, and a white eye shining behind his glasses. He had all of Charlie's moves, but his attacks would set his opponent alight with blue Psycho-Power flames. His supers also had a brief pause where his eye would gleam before the move was pulled off (this made him somewhat unpopular, as the gleam could give an opponent enough time to block or avoid the attack). Shadow would later appear in Marvel vs. Capcom: Clash of Super Heroes as a secret helper character. However, by Marvel vs. Capcom 2: New Age of Heroes, Shadow seems to have reverted back to his original form, but by how is unknown. In addition, the ending for Chun Li also hinted that Bison intended to alter her in the same way, and another hidden character, called Shadow Lady, was a Shadow-altered Chun-Li. Shadow Lady's ending in the game also showed a similar fate befalling Jin Saotome.
Posted by bluedreamer27 at 12:48 PM