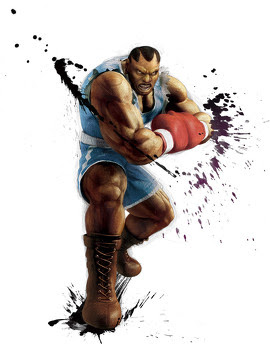 Rising from a childhood of poverty, Balrog was once a great boxing champion and prize fighter. He was banned from boxing for permanently injuring his opponents and accidentally killing one (as well as his illegal maneuvers, particularly his headbutt), so he joined the Shadaloo criminal organization, and worked his way up from the bottom, eventually becoming M. Bison's enforcer.
Balrog wears blue boxing trunks with white trim and a torn white shirt under a blue tank top. He wears red boxing gloves and boxing shoes. His hairstyle consists of short hair in what appears to be wide cornrows. The hair is similar to Mike Tyson's haircuts from the time Street Fighter II was made. In certain illustrations, his Japanese name, "Bison", can be seen on the waistband of his trunks, although it's usually removed when these illustrations are published outside Japan. In Street Fighter IV the word "Champion" appears in its place. 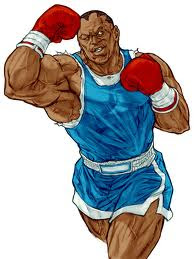 Balrog is a self centered, hot tempered, arrogant, flippant, and a selfish sadistic pugilist who possesses an unsatiable urge for money. His main reasons and motivation for joining Shadaloo and M. Bison throughout the Street Fighter series has always been to attain massive wealth, fame and glory so he can be on easy street for life. For that motivation alone Balrog would even kill, steal or cheat to accomplish this.

Honor is something Balrog doesn't acknowledge (Ironic since he uses a form of it himself). Despite being a once great prized boxer Balrog has cheated in his fights and accidentally killed one of his opponents whenever he felt like it (which is why his movesets includes a headbutt and during his 2nd Ultra combo he stomps on his opponents foot which is considered illegal in boxing). Balrog is shown to not be very smart which is why when M.Bison was believed to be dead after the events of Street Fighter Alpha 3, the role of leader of the organization fell to him, and so and it collapsed immediately and he was then forced to work at security at casinos and other places just to get by. 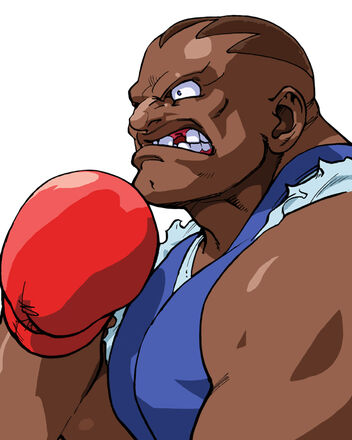