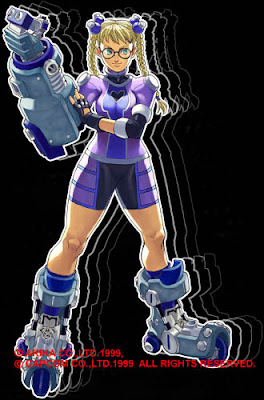 Area is a clever young woman, who is testing her father’s latest inventions, rocket skates, and a giant mechanical arm. She, along with Vulcano Rosso and Sagat made their first EX series appearance in Street Fighter EX2 Plus. Very little about Area's history, or why she enters the EX Tournaments is known. She appears to be the daughter of a very wealthy and creative inventor. Dismayed by his daughter's penchant for martial arts combat, he figures if he cannot dissuade her from entering tournaments, the least he can do is equip her with the latest in technological design to give her an edge.As a fighter, Area doesn't detest the enhancements, she embraces them, considering those who fight without technology to be primitive brutes. Not content to simply accept the inventions her father makes for her, she constantly tweaks and improves upon them between fights to her liking. She arrives into battle with mechanized roller blades, and a mini-rocket launcher on her arm. 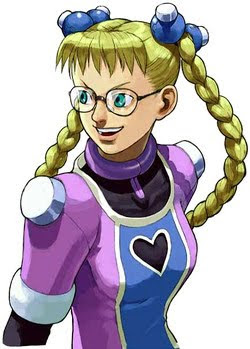 Most fighters who are pit against her don't know which is more bizarre; her equipment, or her lust for battle at such a young age. Area is quick to prove that her technology is not something to be taken lightly, but she lacks the raw strength and talent that many more experienced fighters possess. While she could use her equipment as a blunt clubbing weapon, she is careful not to damage the delicate components that they are made out of. She finds herself easily overwhelmed by opponents who are not impressed with all of her gadgets.
Posted by bluedreamer27 at 8:28 AM