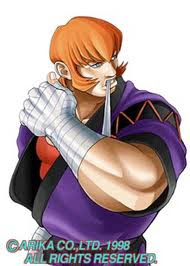 Allen Snider is a character who appears exclusively in the Street Fighter EX series by Arika. He debuted as a hidden character in the original Street Fighter EX. He also appears in the Arika-developed non-Capcom fighting game Fighting Layer. A martial artist once reputed to be the greatest living Karate master in the United States. Allen was the favored contender in the All American Martial Arts Tournament, but lost on his first match against a then-unknown Ken Masters, who told Allen that he was still a "big fish in a small pond".Motivated by Ken's words, Allen renewed his training and developed new techniques based on Ken's such as the Soul Force (Hadouken) and the Rising Dragon (Shoryuken). Allen began traveling the world to prove that he is not only the "biggest fish in his pond", but also the "biggest in the ocean". 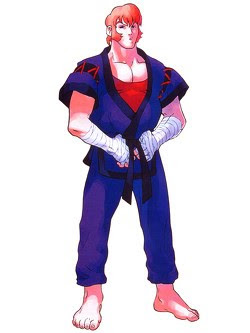 He is based on Chuck Norris. He is the parallel to Ken as Dan is to Ryu, because Allen uses techniques copying the Hadouken and Shoryuken, wear a undershirt inside their gis, and they're voiced by Osamu Hosoi. But Dan is a parody of SNK's Art of Fighting series.
Posted by bluedreamer27 at 9:46 AM