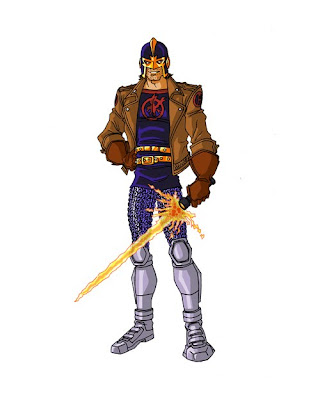 Dane Whitman is a fictional comic book superhero in the Marvel Comics universe, the company's third person to bear the name Black Knight. The Black Knight was originally a normal athletic human being with no superhuman powers. While sharing the gann josin with Sersi, his strength, speed, and other physical abilities were mildly enhanced. After the gann josin link was broken, Whitman returned to being a normal human being. As part of his new role as the Pendragon, however, Whitman has gained minor mystical abilities, such as the ability to see through mystical illusions by looking "past the mundane."

Whitman is an excellent swordsman whose skills have allowed him to best the Swordsman in combat. He is also an excellent fighter in general, able to hold his own against such skilled fighters as Captain America and Wolverine. He is also an expert horseman. Additionally, Whitman started out as a scientist, though specializing in physics (having earned a Master's degree in physics), he is proficient in a wide array of advanced sciences and technologies, including genetic and mechanical engineering; and continues to approach things from a scientific perspective more often than not, despite his ties to the world of magic. He has also demonstrated good leadership skills as leader of both the Avengers and Ultraforce. He has strong strategic and tactical skills.
Posted by bluedreamer27 at 5:51 PM