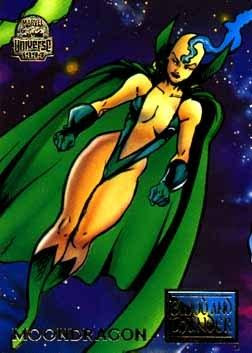 Moondragon is a fictional character in Marvel Comics Universe. A vastly powerful telepath, master martial artist, minor telekinetic, and highly skilled geneticist, Moondragon's most notable characteristics are her shaved head, superiority complex, and gruelling elite excellence in virtually every area a human being can achieve.
Unlike most Marvel characters, who have gained their paranormal abilities through birth or accident Moondragon has strictly achieved her extraordinary talents through extreme degrees of personal regimen. She is openly bisexual, and has been romantically attracted to Daredevil, Thor, Cloud, Quasar, Marlo Chandler, and Phyla-Vell.

Heather Douglas is a human who has accessed her full psionic potential through extreme training under the Titanian monks of Shao-Lom. She is also highly educated in Titanian science, and is a master martial artist.Moondragon primarily possesses tremendous telepathic abilities, that arguably make her the most powerful known Earth-born telepath in the Marvel Universe, which, among other feats, have enabled her to control the population of an entire planet to stop an ongoing war, while enslaving the thunder god Thor as her personal lover. She has demonstrated willpower and spiritual strength rivalling that of Thanos, or the Sorcerer Supreme Doctor Strange, pierced the psionic shields of the cosmic entity Galactus to enable communication, without apparent effort (whereas Professor X and Magneto together could not rouse the latter's attention) and when borrowing her abilities Thanos almost managed to overwhelm the devourer.
Additionally, Moondragon suffers from occasional emotional instability due to her isolated upbringing and intense overachieving superiority complex, which alienated her from contact with her environment, used to only make her able to identify with godlike beings, and sometimes caused her to feel entitled to coerce decisions, or render ruthless judgment, upon those she encountered. However, recent more positive relationships have lightened her up considerably.
Posted by bluedreamer27 at 6:13 PM