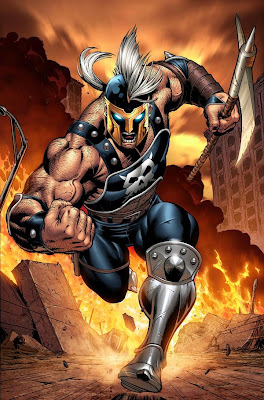 Hercules is a fictional character that appears in publications published by Marvel Comics. Debuting in the Silver Age of Comic Books, the character is based on Heracles of Greek mythology, although the name Hercules is associated with the version from Roman mythology. The character has starred in three self-titled limited series and been a perennial member of the superhero team the Avengers, appearing in each of the three titles. In 2008, Hercules debuted in his own series titled The Incredible Hercules. 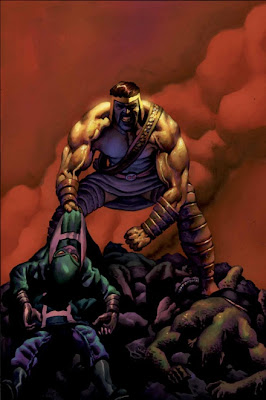 Hercules possesses the typical powers of an Olympian, including superhuman strength; durability; speed; reflexes and immortality. As an Olympian he is resistant to all earthly diseases, and possesses a healing factor. He also has some resistance to magic. The character is the strongest of the Olympians, being capable of feats such as lifting and hurling a giant sequoia tree, smashing rocks to powder, sealing an entire cliff around an opponent with his bare hands,, knocking out a Yellow-crested Titan, and dragging the island of Manhattan back into place. His superstrong legs allow him to run at speeds of over 100 mph, and leap over a hundred feet into the air. However his strength can be taken by significant Olympian magic. He is invulnerable enough to survive blows from even Thor, as well as complete resistance to bullets. Hercules is also highly skilled in archery, although he rarely uses his bow and arrow anymore; boxing and Greco-Roman wrestling, and in combat occasionally wields an adamantine mace - stated to be the equal of Thor's own mystical hammer Mjolnir - forged by the Greek god Hephaestus. This mace is strong enough to survive direct blows from Thor's hammer.
Posted by bluedreamer27 at 4:58 PM