Mantis is a fictional character, a superhero in the Marvel Universe, and former member of the Avengers. Mantis was trained by the Priests of Pama to have total control over her body, and had almost superhuman reflexes and reactions, thus making her a grandmistress of the martial arts as developed by the Priests of Pama, and has demonstrated the ability to defeat opponents as skilled as Captain America. She could also instinctively sense weak points in an opponent and knock out beings as powerful as the thunder god Thor. She has attained a mastery of meditational disciplines giving her an unusual amount of control over her body, including autonomic functions like heartbeat, bleeding, and breathing, as well as awareness of pain, and the ability to recuperate quickly after being injured. Her control over her body was so powerful, that if she was injured, she could quickly heal her injuries through sheer force of will. She also had psychic empathy, a telepathic power that allowed her to sense the emotions of others. 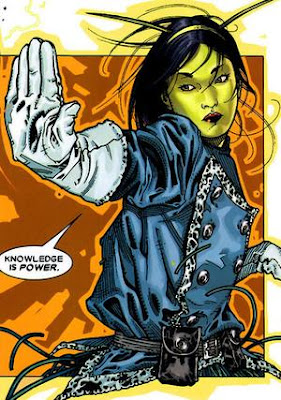 Mantis gained additional abilities are a result of communion with the Prime Cotati. Her empathic ability enabled her to communicate with the plant-like Cotati and with plant-life. To travel in space, Mantis had the ability to separate her physical and astral forms, projecting her consciousness from her body, allowing her to travel interplanetary distances. She also had the ability to transfer her astral form to any place where plant life exists. She could form and inhabit a plant like simulacrum of her human body for herself out of the destination planet's local vegetation. Her fighting skills remained intact, and her empathic abilities were heightened to a superhuman degree and extended to the planet’s flora and biosphere. She could control the vegetation within her vicinity.
During her confrontations with a powerful Thanos clone, she displayed superhuman strength, a talent to simultaneously inhabit multiple simulacrums, and the ability to project strong blasts of energy, but has not been seen using these powers since. As of her appearance in Annihilation Conquest: Star-Lord, Mantis also appears to have gained precognitive abilities, and apparently now labors under a constant awareness of future events. The source of the these new powers is as yet unclear. Other powers displayed or referred to during the series were pyrokinesis and invisibility to the Phalanx.
Posted by bluedreamer27 at 4:41 PM

Email ThisBlogThis!Share to TwitterShare to FacebookShare to Pinterest
Labels: Mantis