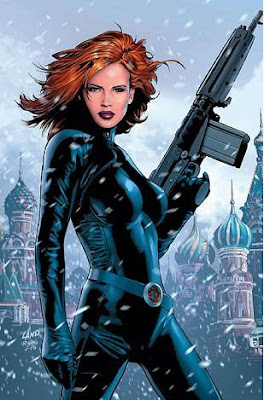 Black Widow (Natalia Romanova, also known as Natasha Romanoff) is a fictional character in the Marvel Comics Universe. Black Widow will be featured in the upcoming 2010 Iron Man sequel, Iron Man 2, where she will be played by Scarlett Johansson. She will also debut in her own ongoing title in April 2010. Romanova grows up to serve as a femme fatale who attempts to seduce American defense contractor Tony Stark and inevitably confronts his superhero alter ego, Iron Man. 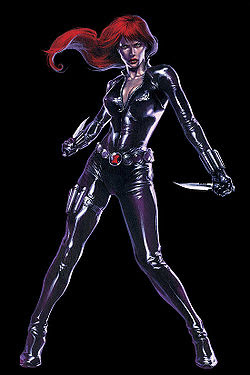 The Black Widow is a world class athlete and gymnast, expert martial artist (including karate, judo, aikido, savate, various styles of kung fu, and boxing), markswoman, and weapons specialist as well as having extensive espionage training. She is also an accomplished ballerina.

The Black Widow uses a variety of equipment invented by Soviet scientists and technicians, with later improvements by S.H.I.E.L.D. scientists and technicians. She usually wears distinctively shaped bracelets which fire "widow sting" energy blasts, as well as "widow line" grappling hooks, and tear gas pellets. She wears a belt of metallic disc-charges containing plastic explosives. Her costume consists of synthetic stretch fabric equipped with micro-suction cups on fingers and feet, enabling her to adhere to walls and ceilings.

The Black Widow has been enhanced by biotechnology that makes her body resistant to aging and disease.