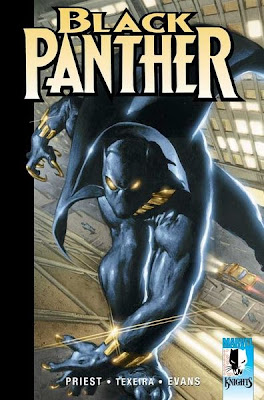 The Black Panther (T'Challa) is a fictional character in the Marvel Comics universe. He is the first black superhero in mainstream American comics, debuting several years before such early African-American superheroes as the Falcon, Luke Cage, Tyroc, Black Lightning or John Stewart. 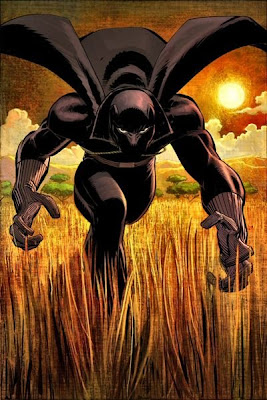 The title "Black Panther" is a rank of office, chieftain of the Wakandan Panther Clan. As chieftain, the Panther is entitled to eat a special heart-shaped herb, as well as his mystical connection with the Wakandan Panther god, that grants him superhumanly acute senses and increases his strength, speed, stamina, and agility to the peak of human development. He has since lost this connection and forged a new one with another unknown Panther deity, granting him augment physical attributes as well as a resistance to magic. His senses are so powerful that he can pick up a prey's scent and memorize tens of thousands of individual ones. T'Challa is a rigorously trained gymnast and acrobat, proficient in various African martial arts as well as contemporary ones and fighting styles that belong to no known disciplines. He is a skilled hunter, tracker, strategist, and scientist — he has a Ph.D. degree in physics from Oxford University. Considered one of the eight smartest people on the planet, he is a genius in physics and advanced technology, and is a brilliant inventor.

As king of Wakanda, the Panther has access to a vast collection of magical artifacts, advanced Wakandan technological and military hardware, as well as the support of his nation's wide array of scientists, warriors, and mystics. The Wakandan military has been described as one of the most powerful on Earth. His attire is the sacred vibranium costume of the Wakandan Panther Cult.In Volume 2, writer Christopher Priest expanded the Panther's day-to-day arsenal to include equipment such as an "energy dagger", a vibranium-weave suit, and a portable supercomputer, the "Kimoyo card." In Volume 3, writer Reginald Hudlin introduced such specialized equipment as "thrice-blessed armor" and "light armor" for specific tasks, and also outfitted him with the Ebony Blade, however the Ebony Blade was recently returned to the Black Knight by T'Challa's wife, Storm.

Thanks for posting this bio of T'Challa. Recently Marvel decided to have T'Challa step down as the Panther (due to injuries received during an ambush by Doctor Doom). His younger sister, Shuri, stepped up and is now the Panther, the Princess Regent of Wakanda and the nation's spiritual leader. This transition was shown in Reggie Hudlin's arc, DEADLIEST OF THE SPECIES.

She's also a arrogant, headstrong and hot tempered, so she faces a number of personal challenges as well as the greater responsibilties as hero, queen and spiritual leader.

In my first arc, POWER, Shuri loses control of her country to insurrectionists backed by Doom.

In DOOMWAR (currently in stores up to #4 of 6), we learn that the insurrection was a distraction to allow Doom to plunder the stockpile of refined vibranium.

Once DOOMWAR is finished, Shuri will remain as Black Panther and T'Challa will have other work to do in the Marvel Universe.