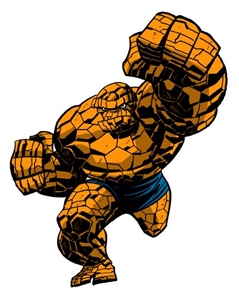 The Thing (Benjamin Jacob "Ben" Grimm) is a fictional character, a founding member of the superhero team known as the Fantastic Four in the Marvel Comics universe. He was created by Jack Kirby and Stan Lee in The Fantastic Four #1 (Nov. 1961). His trademark orange rocky appearance, sense of humor, blue eyes, and his famous battle cry, "It's clobberin' time!" makes him one of comics' most recognizable and popular characters.

As a result of exposure to cosmic rays, the Thing possesses high levels of superhuman strength, stamina, and resistance to physical injury. His strength has continued to increase over the years due to a combination of further mutation and special exercise equipment designed for him by Reed Richards.

He is capable of surviving impacts of great strength and force without sustaining injury. He is also able to withstand gunfire from high caliber weapons as well as armor piercing rounds. The Thing's highly advanced musculature generates fewer fatigue toxins during physical activity, granting him superhuman levels of stamina.

Aside from his physical attributes, the Thing's senses can withstand greater levels of sensory stimulation than an ordinary human, with the exception of his sense of touch. His lungs possess greater efficiency and volume than those of an ordinary human. As a result, the Thing is capable of holding his breath for much greater periods of time.

Despite his brutish, even monstrous form, the Thing suffers no change in his personality nor his level of intelligence. Despite his greatly increased size, the Thing's agility and reflexes remain at the same level they had been prior to his transformation.

The Thing is an exceptionally skilled pilot, due to his time spent as a test pilot in the United States Air Force and as a member of the Fantastic Four. He is also a formidable and relentless hand to hand combatant. His fighting style incorporates elements of boxing, wrestling, judo, jujutsu, and street-fighting techniques, as well as hand-to-hand combat training from the military.

After an encounter with the Grey Gargoyle, the Thing seemed to have gained the ability to shift between his human and rock forms at will.That ability has since been lost after it was revealed that he spawned clones in an alternate reality every time he changed.

On occasion, when Ben Grimm regained his human form and lost his Thing powers, he used a suit of powered battle armor designed by Reed Richards that simulated the strength and durability of his mutated body, albeit to a weaker degree. Wearing the suit, which was designed to physically resemble his rocky form, Ben continued to participate in the Fantastic Four's adventures until it was destroyed in battle

Email ThisBlogThis!Share to TwitterShare to FacebookShare to Pinterest
Labels: Avengers, The Fantastic Four, The Thing