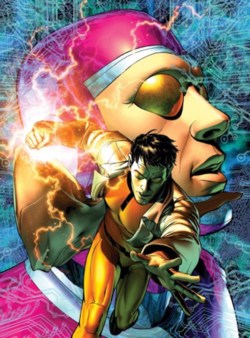 Machine Man (Aaron Stack, serial number Z2P45-9-X-51 or X-51 for short) is a fictional character, an android superhero in the Marvel Comics Universe. The character was created by Jack Kirby for 2001: A Space Odyssey #8 (July 1977), a comic written and drawn by Kirby featuring concepts based on the eponymous Stanley Kubrick film and Arthur C. Clarke novel. Shortly thereafter, Machine Man spun off into his own Kirby-created series. 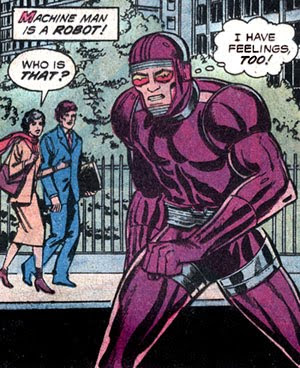 Machine Man was constructed by unnamed computer engineering specialists under Dr. Oliver Broadhurst at the Broadhurst Center for the Advancement of Mechanized Research; Dr. Abel Stack was his chief programmer. Machine Man's robotic materials, design, and construction (titanium alloy) provide him with a number of abilities, as does his adamantium composition. He possesses superhuman strength, speed, stamina, durability, and reflexes. He is an expert on his own construction and repair. Machine Man has superhuman visual acuity. He possesses an above normal intellect, with a capacity for unlimited self-motivated activity, creative intelligence, and human-like emotions. He has superhuman cybernetic analytical capabilities, including the ability to process information and make calculations with superhuman speed and accuracy.
Machine Man is powered by solar energy. He can also draw power from several different external energy sources, if needed. Machine Man has the ability to telescope his arms and legs to a length of 100 feet. Machine Man's hands are equipped with variable payload fingers, some routinely carried in his fingers, other stored in hidden recesses in his belt. His fingers contain a different variety of weapons, including: gas chromatograph, laser interferometer, micro-pulse radar, audiometer, seismometer, gravity wave detector, pulse-code modulator, standard computer input/outputs, radio beacon, all-wave transceiver, laser cutting torch/weapon, and projecting heat, cold, or electricity; one of his fingers has been shown to contain a bullet-firing mechanism that uses .357 Magnum ammunition. He has the ability of flight under his own power through the means of anti-gravity disks. 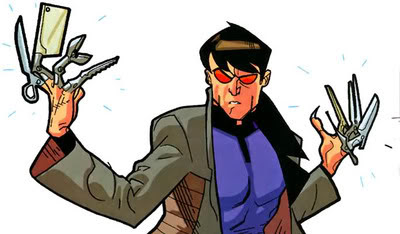 During the X-51 series, Machine Man had a few extra features thanks to nanotechnology within him at the time. This mainly included parts of himself being rebuilt if damaged, also causing many changes in his look from issue to issue. He also had a beam cannon on his chest.

In Nextwave, he has become a living Swiss Army knife of sorts, containing various tools and weapons for a multitude of situations, both useful and esoteric. When asked if he could impregnate a human woman from several feet away, Aaron simply states "I am full of very useful devices."