Firebird (Bonita Juarez), is a fictional pyrokinetic character that has appeared in various comic book series published by Marvel Comics. A former member of the Avengers, she exists in Marvel's main shared universe, known as the Marvel Universe.
Firebird was alone when she fought against the man called Master Pandemonium. Exhausted from her battle, she fell to the ground near the new Avengers Compound on the West Coast, where she was found by the Thing. She enlisted the aid of the Avengers in battling against Master Pandemonium. She assisted the Avengers during the following adventures, and desperately wanted to be invited to join, something to which chairman Hawkeye remained oblivious, since he was trying to recruit the Thing. 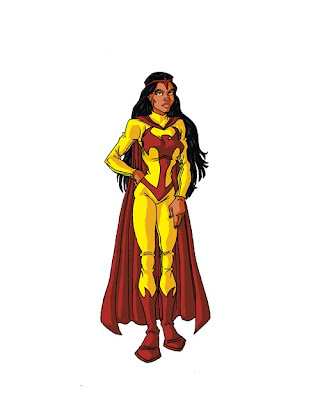 Bonita Juarez gained superhuman powers due to bombardment by radiation from a meteorite containing energy waste from an alien's scientific equipment. As Firebird, she has the power of pyrokinesis, which enables her to mentally excite the atoms in an object until it spontaneously combusts. By using her powers to ignite the air around her, she can surround herself with an aura of flames that often takes the shape of a bird, and if she focuses her flames downwards in a tight stream, she can propel herself through the air like a rocket. She can channel her powers through her hands to seemingly project searing thermal blasts from her body (actually from her mind), capable of melting steel. She can fly by riding wind currents stirred up by the nimbus of fire with which she surrounds herself while flying. Although she can propel herself at superhuman speeds, she cannot breathe at those speeds without skin protection and an oxygen supply. Fatigue impairs her performance after approximately one hour of peak expenditure of power.

She has also displayed a limited power of precognition, allowing her to have glimpses of the future.

Firebird also seems to be immune to most forms of radiation and poison (and even demonic possession) as well as the physical effects of her mental powers, and has displayed the ability to survive in the vacuum of space. Firebird may be immortal.