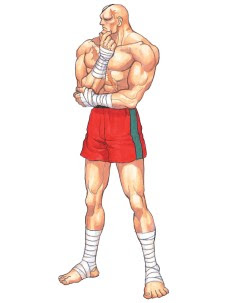 Sagat is a character in the Street Fighter series. He was originally a boss character in the early editions of series. He was later turned into a regular, playable character. According to Street Fighter co-creator Finish Hiroshi, Sagat's style was modeled after dramatic television kickboxing personalities. Sagat won the title of Emperor/God of Muay Thai from Nuah Kahn as a teenager, and became a national hero in Thailand. He defended his title from a fighter named Go Hibiki, in a match that cost Sagat the use of his right eye, and cost Go his life. Go's son, Dan, swore revenge on Sagat. 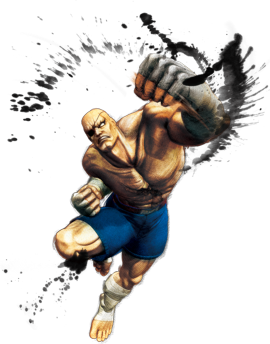 Sagat plays similarly to Ken and Ryu, with some notable differences. Foremost is his attack range: his low attacks and standing horizontal kicks have impressive range. In Street Fighter II, producing an array of alternating high and low fireball attacks can confuse and greatly damage an opponent. This technique is less viable in later games where projectiles do less damage, or can otherwise be avoided. In Capcom vs. SNK 2, Sagat's normal attacks, particularly his crouching fierce punch, have unusually high power and priority, making him one of the easiest characters to use effectively in that game. He is also known for his multiple-hitting Tiger Uppercut (Tiger Blow in the Alpha series) which is similar to Ken and Ryu's Shoryuken/Dragon Punch. The Tiger Blow had low priority against Shoryuken. In Street Fighter IV, the Tiger Uppercut has priority even over Ken's EX Shoryuken. Sagat's attacks do much more damage than Ryu or Ken. Sagat's supermoves such as Tiger Genocide have great priority.
Posted by bluedreamer27 at 7:28 PM