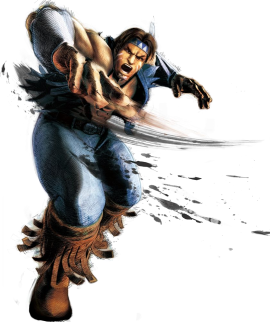 T. Hawk, or Thunder Hawk , is an American Indian video game character in Street Fighter series. He was first introduced in Super Street Fighter II, and has made a few recent appearances after. When he was an infant, he and the members of his tribe were being forced off their land by Shadaloo. Some of the Thunderfoot members resisted and fought against them, and many were killed, including T. Hawk's father, Arroyo Hawk, who was killed by a younger M. Bison[1]. Now living in Mexico near the Monte Albán plains, T. Hawk wants nothing more than revenge from Bison for his despicable actions and to reclaim the land that was taken from his people.The Thunderfoot tribe had experienced disappearances of many of their people, T. Hawk took the responsibility of finding them. One of them, his beloved Julia, became Juli, one of Bison's brainwashed dolls. 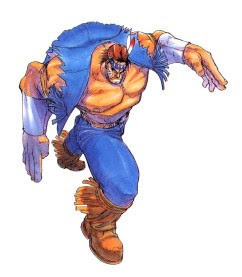 He is the equal of Zangief in strength, but uses more finesse in his attacks. Though large, he can defeat many smaller, more agile fighters with his devastating Rising Hawk, Diving Hawk, and Mexican Typhoon techniques. Unlike most bulky warriors, he does not like to grapple, but he can when necessary. More often, however, he uses the swooping aerial attacks also at his disposal.
Posted by bluedreamer27 at 11:33 PM