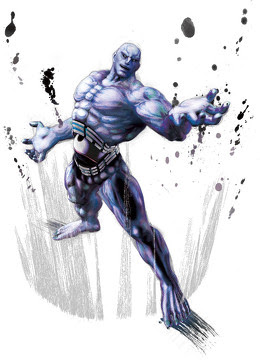 Seth is the main antagonist of Street Fighter IV. He is the head of Shadaloo's weapon division, S.I.N. According to the official Street Fighter website, Seth is one of many genetically engineered replacement bodies for M. Bison. Bearing chrome skin and an extremely muscular physique, Seth is a synthetic human; whether android or cyborg is unclear. In his abdomen and enclosed inside a pattern consisting of the Eight Trigrams of Taoist cosmology is an exposed area, which contains a rotating yin-yang sphere. This sphere, which he calls the Tanden Engine, appears to be the source of his power, where it copies and translates the data from Seth's opponents, and allows him to mimic the special techniques of other fighters, such as Ken's Shoryuken, Guile's Sonic Boom, and Dhalsim's unique ability to stretch his limbs. When Seth uses his Tanden Engine to create a vacuum his skin color changes to navy blue, and his eyes turn black with a white iris. 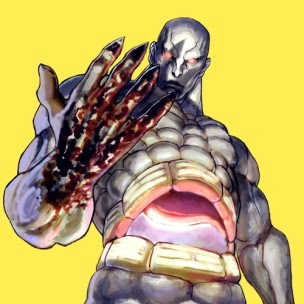 Seth employs special powers and techniques from combatants in the game and appears to be one of the more powerful characters to appear in the Street Fighter franchise. His normal techniques are similar to Urien's and Gill's from Street Fighter III. He possesses various attacks such as a Shoryuken that can hit three times and is very similar to the one that Ryu, Ken, Akuma, Gouken, and Sakura use; Zangief's piledriver, Chun-Li and El Fuerte's Wall Jumps, Chun-Li's Yosokyaku and a variation of her Lightning Legs, Akuma and Gouken's Tenmakujinkyaku (Dive Kick), as well as vacuum blasts with the flick of his wrists, similar to Charlie's Sonic Boom. He also possesses a metamorphic body of sorts, being able to stretch his arms like Dhalsim, as well as teleport like him. His unique ability seems to center around space as he is able to suck in opponents from afar and pound on them afterwords. When using this ability, his body turns black temporarily.
Posted by bluedreamer27 at 6:25 PM