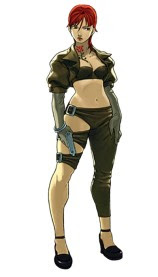 Sharon is a character who appears exclusively in the Street Fighter EX series by Arika. She debuted in the arcade version of Street Fighter EX 2. Sharon was entrusted to a monastery when she was still an infant. As she grew up, Sharon would began lead a double life, working as an A-class agent for a secret intelligence organization, as well as a nun raising orphans at the monastery she was raised at. Having never known her true parents, Sharon spent everyday wondering who they were and whatever happened to them. One day, Sharon's superiors gave her orders to assassinate a certain individual from a neighboring country. While investigating the crime syndicate her target belonged to, she learned that one of the group's key member has the same rose tattoo she has on her chest. Sharon decided to disregard her duty and infiltrated the syndicate to ascertain the identity of this individual and whether or not the person was related to her. While chasing the person with the rose tattoo, she approached the mastermind of the organization. However, she was unable to capture either. 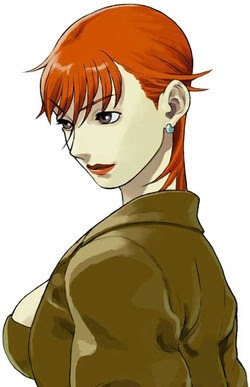 The person with the rose tattoo had the same abilities and fighting style Sharon had, managing to overpower her. For insubordination against her organization, as well as defying her monastery's commandment on pursuing personal vendettas, Sharon was placed on house arrest for a month. After serving her sentence, Sharon went on to continue her search for the person with the rose tattoo.
Posted by bluedreamer27 at 10:53 PM