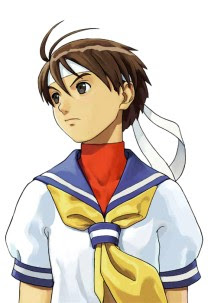 Sakura Kasugano is a character in the Street Fighter series. She is a 16-year-old (as of Street Fighter Alpha 3) Japanese schoolgirl who has an intense fascination with Ryu. She has managed to copy and learn some of Ryu's techniques, but really wants him to train her personally.

Sakura typically fights in her school's uniform, a short-skirted sailor fuku (seifuku) with the collar popped and red bloomers underneath. She wears a red top under her uniform, red boxing gloves, and a white headband (given by Ryu before Street Fighter Alpha 2). She has short brown hair. 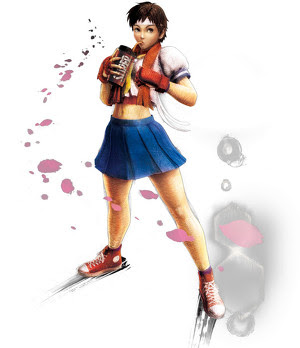 Chronologically, Sakura first appeared in Rival Schools, where she had begun to participate in street fighting after watching Ryu win the first World Warrior tournament. Rival Schools saw Sakura involved in the adventure between her school and various others in Aohura city. Fighting in it, she realized how much it meant to her to protect something she cared about.
Sakura fights in an emulated version of Ryu's fighting style. She can successfully manipulate ki and is subsequently able to perform the "Hadouken" energy attack (however, due to her lack of training, she cannot throw it the full length of the arena like Ken or Ryu can). Unlike Ryu and other warriors from the same style, however, she can control the size of her Hadouken and throw larger Hadouken projectiles that sacrifice range and execution speed for size and power (up to 3 times larger). In the Marvel vs. Capcom series, she throws her Hadoukens diagonally upwards, though her "Hiyakeshita" (literally "Sunburned") version still throws them horizontally). In Capcom vs. SNK, she is given an energy spark instead of a traditional projectile (called the "Hadoushou") that hits 3 times but is limited to the area in front of her hands (though her EX version lets her use her special version of the Hadouken).
Posted by bluedreamer27 at 7:34 PM