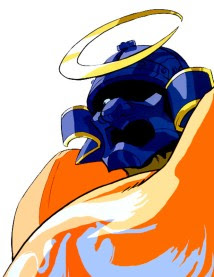 Sodom is a video game character from the both the Final Fight and Street Fighter series. He first appeared in Final Fight. He was renamed Katana in the North American SNES version of Street Fighter Alpha 2 for name issues. He was a top member of the original Mad Gear gang. A Caucasian male born in the United States, Sodom is obsessed with Japanese culture and considers himself Japanese. He is well-versed in many elements of Japanese culture, though his usage of the language is somewhat dubious.
In the original Final Fight, Sodom controlled the Mad Gear gang from the Metro City Subway. He was undefeated in underground pro wrestling, albeit due to his use of "foreign objects" (the swords), until he met Guy, as well as Cody and Haggar. At first Sodom was honored to face a true ninja of Japanese descent like Guy, but this honor would turn into deep shame as Guy and his allies beat him. From then on, Sodom hated Guy for not only being one of the people to rid Metro City of his gang, but for destroying his undefeated streak which proved in his mind he was no match for a true Japanese fighter. The incident also cost him a lot of respect amongst his fellow gang members. 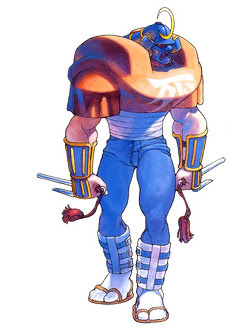 Sodom is the only character in Street Fighter Alpha 3 whose weapons he uses depends on what Ism is used. If using X-Ism fighting style, he'll use his katanas; otherwise, in the A-Ism and V-Ism styles, he will use his jitte. This is because his X-Ism visage is based on his Final Fight appearance.

Sodom was notable for being fairly difficult to defeat head-on in the original Final Fight, due to his dash attack being nearly invincible and quite damaging. However, it is possible to defeat him without actually taking any damage at all if the player approaches him along a vertical axis and uses grabbing and throwing moves, since his dash attack can only move horizontally or diagonally. Successful application of the above method can allow the player to easily defeat Sodom without harm, since he is the only boss character in Final Fight who does not have henchmen to back him up during battle. 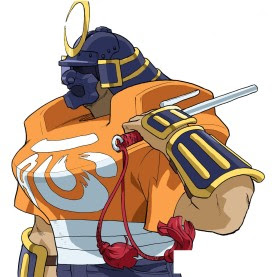 In combat, Sodom wears tabi and geta, samurai gauntlets, blue jeans, body armor, and a samurai kabuto with a mask.

On the front of his outfit, Sodom has scrawled the Japanese kanji shi (死), meaning death. However, this kanji is not written properly, and actually has no meaning. Sodom's failed attempt at Japanese calligraphy emblazoned across his chest at all times is meant to be humorous.

He is never seen fighting without a pair of jitte or katana blades, making him one of the few characters to appear in the Street Fighter series to use weaponry. In the Japanese version of Final Fight, both katana are named Masamune, and Muramasa.