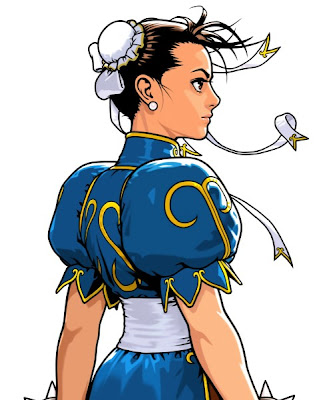 Chun-Li is a character in the Street Fighter series. She is the first female playable character to appear in a 1-on-1 fighting game. Introduced in Street Fighter II, Chun-Li was the only female character in the game, (as well as one of the youngest fighters to appear in Street Fighter II) and while not as physically powerful as the other characters, she was by far the quickest. Her most famous attack is the Hyakuretsukyaku (Hundred Rending Leg, commonly known as the Lightning Kick), where she repeatedly kicks her opponent from a tilted standing position with incredible speed. 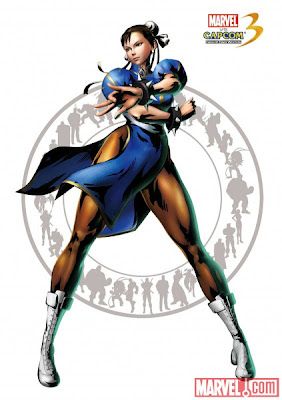 Chun-Li's appearance has differed several times in the Street Fighter series, as well as in official art and cameos she has made in other works. She is known for her very muscular thighs. She is 5 feet 6 1/2 inches according to her Street Fighter Alpha 3 biography. Chun-Li wears the qipao, a Chinese dress imported over from Manchuria, yet popular among girls during the early 20th century. Her outfit is modified to allow a far wider range of movement than a normal qipao. She also wears white combat boots and blue leotard with dark brown sheer pantyhose with her qipao. Her qipao is blue with golden accents. She was originally supposed to wear a peach-colored qipao, as seen in her in-game profile and ending in the original Street Fighter II.
In almost every game, Chun-Li's signature move is the Hyakuretsu Kyaku which was her ability to throw multiple kicks in one sitting. It is referred to as the Lightning Kick. Its easy accessibility (bluntly pressing a kick button rapidly) has become a staple in many games. Her Spinning Bird Kick acts like Ryu's and Ken's own Tatsumaki Senpuu Kyaku. Chun-Li can also wall-jump, meaning that pressing in the opposite direction after touching the wall during a jump will allow her to bounce off of it. While jumping, she can perform a Stomp Kick on top of her opponent's heads. Beginning with Street Fighter Alpha, this move was replaced by the Sen'en Shuu, which was an overhead drop kick which knocked the opponent down. This, in itself, was replaced by the Hazan Shuu in Street Fighter III, which was a similar move where Chun-Li flipped in the air before attacking with her overhead kick. She also regained her Spinning Bird Kick in that game.
Posted by bluedreamer27 at 6:12 AM