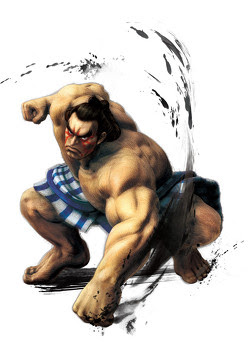 Edmond Honda , more commonly known as E. Honda, is a video game character created by Capcom for the Street Fighter series of fighting games. Introduced in Street Fighter II as part of the starting lineup, he has appeared in Street Fighter Alpha 3 and the Capcom vs. SNK series, as well as several cameos and mentions. His shikona for sumo is mentioned as "Fujinyoma", and he has attained the sumo rank of "Ozeki".

He has black hair in a chonmage and wears only a blue yukata. His face is painted in the kumadori style of makeup used in kabuki. Honda's signature move is the "Hyaku Retsu Harite" (lit., "Hundred Violent Sumo Hands"; commonly referred to as the Hundred Hand Slap, or (incorrectly) the thousand hand slap) 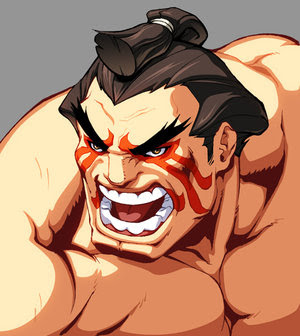 Honda's fighting style, as already mentioned above, is based on sumo wrestling. In his first appearance in the original Street Fighter II, he has two special attacks, the Hundred Hand Slap and the "Super Zutsuki" (commonly referred to as the Flying Headbutt). In Hyper Fighting, Honda gains a third special attack, the Flying Headbutt, as well as the ability to move while performing his Hundred Hand Slap.

In Super Street Fighter II Turbo, Honda's super combo is the Super Killer Head Ram (also known as the Oni-Mu-Sou), a powered-up version of his Flying Headbutt. In Street Fighter Alpha 3, Honda gains two additional super combos, the Fuji Drop, and the Orochi Crush. In Street Fighter IV, he gains a new "Ultra Combo" called the Ultimate Killer Head Ram, in which he does a Sumo Headbutt with so much force that he pushes the enemy to the other end of the stage. After the enemy is cornered at the other end of the stage, Honda uses his Hundred Hand Slap many times until he does one final slap against the end of the stage. Like other Ultra Combos, the move is very powerful.