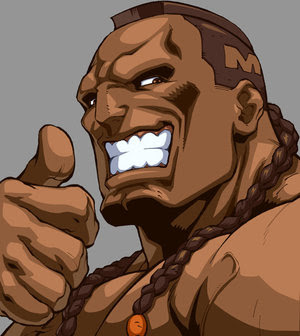 Dee Jay is a character in the Street Fighter series. Dee Jay is the only character in the series to be designed by Capcom USA. He was designed by James Goddard, who modeled Dee Jay after martial arts film star and Tae Bo creator, Billy Blanks. Dee Jay's braided mohawk also resembles Blanks's role as Khan in The King of the Kickboxers. Known as "The Southern Comet", Dee Jay is a cheerful capoeira kickboxer who fights to musical rhythm. Quickly rising to the top of his division, he travels the world looking for new challenges. In his in game storyline, he anonymously challenges and defeats Adon, another kickboxer in the rival Muay Thai style, with Adon vowing revenge. He eventually finds his true goal: Sagat, the "emperor" of Muay Thai. Sagat, now fallen from grace and an enforcer for M. Bison, does not take the cheerful Jamaican seriously. Countering by declaring that in this fight he "means business", Dee Jay challenges Sagat and defeats the former champion, further adding to Sagat's depressed losing streak. Sagat's employer Bison takes an interest in Dee Jay at this point, offering him a position in Shadaloo. Dee Jay refuses, and when Bison deals with the rejection by trying to kill him, Dee Jay staves Bison off and leaves, unable to truly defeat the dictator while the Psycho Drive is operational. Dee Jay returns to Jamaica and, inspired by his battles, hums a new tune as he walks down the street. This catches the ear of a record producer, who immediately offers Dee Jay a record deal 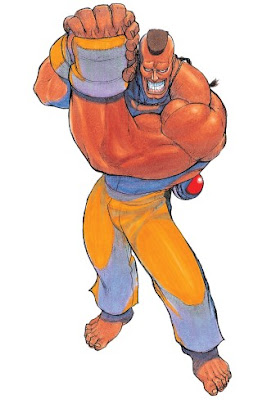 Dee Jay's cheerfulness has him smiling constantly and he has a thumbs-up gesture. He wears orange loose drawstring pants with yellowish-white lettering that reads "MAXIMUM" and orange sparring gloves. His hairstyle is a braided mohawk with a letter "M" on each side of his head which stands for "MAXIMUM." Dee Jay is also seen in the anime movie and some art to be wearing a Caribbean chain necklace.
Posted by bluedreamer27 at 11:04 AM