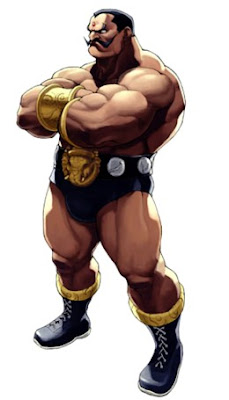 Darun Mister is a wrestling champion from India. He hears of Zangief's legendary wrestling prowess and, bored with his inferior opponents, seeks out the Russian to prove to himself that he is indeed the world's ultimate fighter. He also acts as a bodyguard for Pullum. 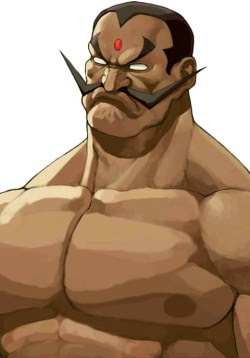 Darun's fighting style is very similar to Zangief's, and the fact that he has a lot of wrestling-type moves. His throw is a DDT in Street Fighter EX Alpha, his signature move is a powerbomb; and his Dusk Lariat is a clothesline or two. His move input is somewhat similar to Zangiefs as well in Street Fighter EX, and Street Fighter EX Alpha in particular, using the two inputs of (Up, Up-Backwards, Back, Back-Downwards, Down, Down-Forwards, Forward) Kick (Indra Bridge)/Punch (Brahma Bomb), which are the same as Zangiefs Russian Suplex and Spinning Pile Driver respectively.
Posted by bluedreamer27 at 7:42 AM