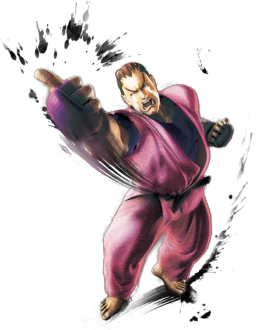 Dan Hibiki is a character from Capcom's Street Fighter series of fighting games. Dan is consistently portrayed as an arrogant, overconfident, yet utterly feeble character in many of the games he is featured in. He is widely considered to be the comic relief of the series because of his over-the-top poses and battle cries. In his most recent appearance in the home versions of Street Fighter IV, however, his moves have been slightly upgraded in order to be balanced with other characters.

According to the Super Street Fighter IV blog, Dan was born on November 25. Dan's father, Gou Hibiki, was a rival of Sagat. Gou gouged out Sagat's right eye and Sagat beat him to death in retaliation. Because of this, Dan sought revenge on Sagat, training to become a fighter, but was expelled from Gouken's dojo when his motivations were learned. Dan thus developed his own style of Gouken's martial art merged with Muay Thai elements and called it Saikyo-ryu, "The Strongest Style," despite the complete weakness of his techniques. 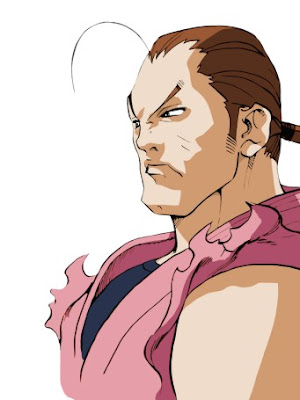 In the games he appears in, Dan is distinguished from Ryu and Ken by his ineffective special moves, such as a projectile with a comically short range (Gadouken or Self-Taught Fist) and a triple-hitting flying kick that is easy to block (Dankukyaku or Gale Kick); both reminiscent of special attacks in Art of Fighting (if one had no Spirit Power in that game, special attacks become useless). Dan also possesses Koryuken, an anti-air uppercut (initially different, but eventually mimicking Ryu and Ken's Shoryuken) with very little horizontal range, during which he sometimes flashes and becomes completely invincible. He can also perform Premium Sign, where he autographs a portrait and flings it at the opponent.
Posted by bluedreamer27 at 7:22 AM