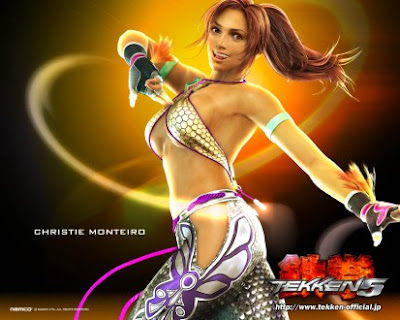 Christie Monteiro (born October 18, 1987) is a character in the Tekken series of video games. She is the granddaughter of the master who taught Eddy Gordo. Originally, the development team intended to create a female Capoeira fighter for Tekken 3, but felt too unconfident at the time and so opted for a male character instead. Upon her introduction in Tekken 4, Christie replaced Eddy as the prominently-featured Capoeira practitioner. Yet, with the release of Tekken 5: Dark Resurrection, Eddy has been reintroduced to the canonical series as a non-palette swap character. Christie is the granddaughter of the master to Eddy Gordo, who took him in the art of Capoeira during his time in prison. While in prison, Eddy swore an oath to the Master to pass on the art of Capoeira to his granddaughter.

Christie Monteiro appears in the live-action Tekken movie. In addition, she has no relation to Eddy Gordo and is Jin's "girlfriend". Christie is portrayed by American actress Kelly Overton. This version of Christie is a Caucasian mixed martial artist instead of a Brazilian Capoeira fighter and is referenced to her video game incarnation by her fighting gear and her being trained by her grandfather. She seems to be originating from an organization called Vectrocorp.
Christie bears more than a passing resemblance to Monique Fuentes, Aishwarya Rai and Jennifer Lopez.