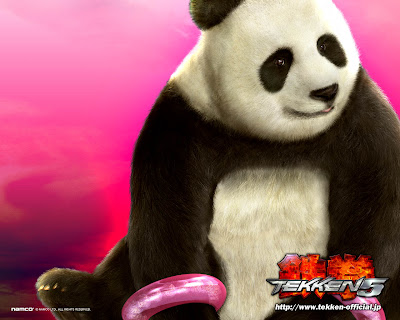 Panda is a character in the Tekken fighting game series. She is, as her name implies, a Giant Panda. She is the loyal pet, best friend, and bodyguard of Ling Xiaoyuo. She has the same fighting style as Kuma, Heihachi Mishima's pet grizzly bear. Kuma seems to have a crush on Panda. Like Xiaoyu, Panda made her debut in Tekken 3.
Panda is the bodyguard of Ling Xiaoyu and was taught the same fighting of Kuma the second and Ling Xiaoyu but she didn't use Ling's moves. Panda lost in the tournament by who is unknown, she knew that Kuma had a crush on her, but she dislikes him, but to like him just a little. After then she just left school to go home with Ling Xiaoyu. 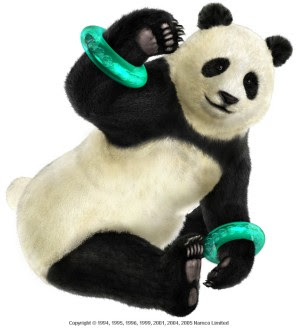 In Tekken 4, Panda is given her own story. In this story, it chronicles Panda as missing Kuma somewhat, and throughout her prologue, she is seen thinking about Kuma. In her Tekken 4 ending, she hands over control of the Mishima Zaibatsu to Xiaoyu, and then she calls Xiaoyu over to an abandoned wrestling ring. She then explains to Xiaoyu that she has decided to search for Kuma on her own and wishes for Xiaoyu to do the same with Jin Kazama.
In Tekken 5 After the conclusion of The King of Iron Fist Tournament 4, Ling Xiaoyu had been feeling depressed. Panda thought long and hard about how she could make Xiaoyu happy again. Panda decided that the best approach would be to find Jin Kazama. Panda searched for Jin, but she was unable to find him. One day, Xiaoyu came to her excited. "Panda, I've decided to enter The King of Iron Fist Tournament 5, and I need your help once again". Panda didn't quite understand Xiaoyu's reason for entering the tournament, but she decided to help if it would make her happy
Posted by bluedreamer27 at 12:10 AM