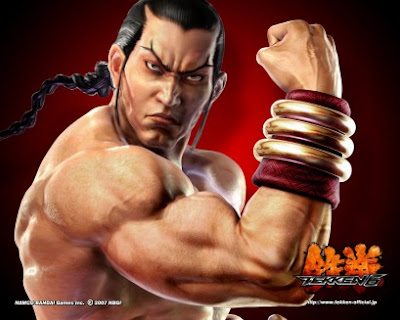 Feng Wei (born January 7, 1981) is a fictional Chinese character from the Tekken franchise of fighting games.

As a boy, Feng Wei was raised as a disciple by a Kenpo master who was so skilled he was known as Shinken (literally God Fist). At 20 years of age, Feng was the best student his school had ever seen. When his master scolded him for fighting outside the dojo, Feng killed him. Now Feng seeks the secrets of the God Fist scrolls stolen by the Mishima family, and enters the King of Iron Fist Tournament 5 to do so.

Asuka Kazama and Lei Wulong have connections with this ruthless, merciless Kenpo fighter. Feng severely beat Asuka's father and destroyed his dojo in his search for the scrolls. Lei is trying to capture Feng for his similar actions in China.He manages to retreive the God Fist scroll in the King of Iron Fist Tournament 5, and after reading and studying the vague scroll, he is seen practising his new powers, and manages to destroy an entire mountain in a single strike. 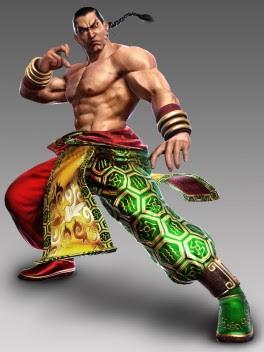 Feng Wei was successful in retrieving the treasured "God Fist" scroll from the Mishima Zaibatsu during The King of Iron Fist Tournament 5. The scroll merely stated, "Destroyer of all styles, the one true ultimate style, it transcends the power of The Dragon God, which exceeds all human ability." Dumbfounded, Feng Wei receives information about The King of Iron Fist Tournament 6, and, seeking more information, he once again looks towards Japan.
Due to his appearance and fighting style, his design may be based on Retsu Kaioh from the anime/manga series Grappler Baki.
Posted by bluedreamer27 at 1:58 PM