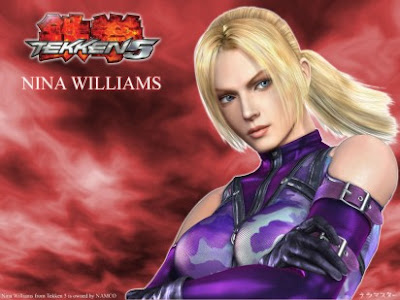 Nina Williams (born December 28, 1964) is a character from the Tekken game series. She is a cold-blooded assassin who made her first appearance in the original Tekken and has appeared in every Tekken since. She is one of only four Tekken characters to appear in each game and the only female character to have appeared in every installment. She has a notable love/hate relationship with her younger sister, Anna Williams.

Nina has a lethal fighting style, consisting of many throws, elaborate kick combos, grapples, holds, and chain-throws (something that only a few Tekken series characters have). In 2005, Nina Williams starred in her own spin-off game, Death by Degrees. 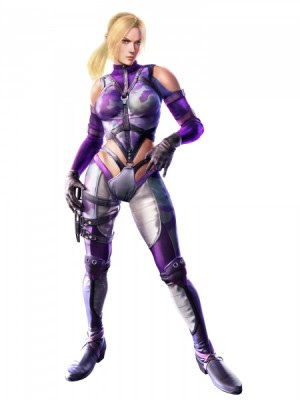 Nina is generally portrayed as emotionless, stoic, and focused. She does not smile often, as opposed to her more frivolous sister, but Nina does display a sense of humor where tormenting Anna is concerned. Nina is somewhat antisocial, and also appears to be in great psychological turbulence, most noticeably since Tekken 3. This is presumably due to the traumatic events of her life such as witnessing the death of her beloved father (before the events of Tekken) as a young child, the results of her "cryosleep", which resulted Nina suffering amnesia. Two more events that may have contributed to Nina's cool demeanour are the discovery that she has a son, Steve Fox, who was created by in-vitro fertilization without Nina's knowledge during her "cryosleep" and the deep-seated enmity between Anna and herself.
Ever since her debut, Nina instantly became a fan favorite, due to her speed, lethal moves, and chain throws. Her strength is on par with most characters, and she can even evade and counterattack. Her combos are something to watch out too, as they are elaborate, strong, and even lethal. However, her chain throws are difficult to perform that it requires precision and patience.
Posted by bluedreamer27 at 2:34 PM