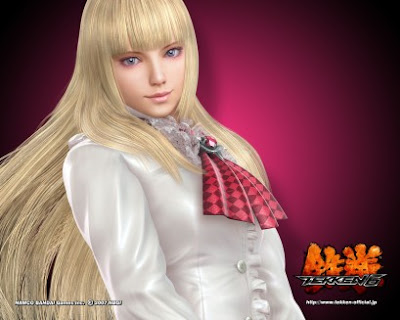 Lili (born November 3, 1991), is a Monegasque 16 year-old girl in the Tekken fighting game series. Along with Sergei Dragunov, Lili is one of the two new characters that was first introduced in Tekken 5: Dark Resurrection. She appears in Tekken 6 and Tekken 6: Bloodline Rebellion. She is the only daughter of a wealthy oil magnate in Monaco. She resides in a very luxurious suburban mansion with her father, and her butler, Sebastian.

Four years ago, Lili struggled violently to free herself from a group of kidnappers.She unexpectedly took out one of her captors, and at that moment, she first realized that she took pleasure in defeating her opponents. This does come with a setback. Deep down inside, Lili is a gentle person. However, she only wants to please her father, whom she knows loathes fighting.

Nothing much is known of Lili yet, though she appears somewhat compassionate. However, deep down, Lili is a gentle person and a very sweet young lady. Lili has been often described as a "graceful" fighter in the Tekken series. Lili is only 16 when she first debuted. In general, Lili seems to strive for grace and poise with every movement — even and especially during fights. She is also very confident in her fighting abilities, as shown by her winning and pre-match quotes. Her behavior, however, is split between efforts to sate her own need for fighting and a deep love for her father, who abhors violence. As an example of the latter, before fighting her Stage Four sub-boss, Ganryu, Lili says that he has robust eyebrows, just like her father's. 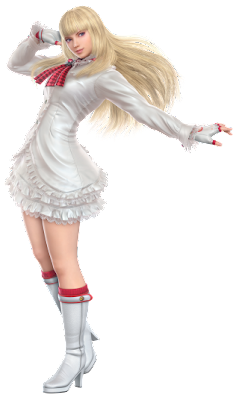 Lili's appearance seems to portray a "sweet and kind" look. Lili is a young Monegasque teenager with honey-blonde hair with full fringed bangs that cover her forehead, and has light bluish-grey eyes. Lili is also currently the tallest human female character, standing at 5' 9'. Her primary outfit consists of a white Victorian-style dress, white boots with red socks, red-and-white fingerless gloves, and a red-and-black gingham-patterned ascot tie. Her primary outfit, and all of its customizations feature a heavy Lolita theme, popularized in Japan. Headresses, miniature top hats, and thick glasses all suggest that her second costume is an obvious nod to the Lolita fashion style, and it complements Lili to such perfection, as the Lolita subcultures strive for elegance, grace, and beauty just as she strives for in her battles.

Lili's fighting style was originally called Monegasque-Gymnastic Street Fighting Style. This style is characterized by many dancelike and gymnastic maneuvers - graceful and versatile spins, cartwheels, handstands, tumbles and pirouettes. This fighting style is probably self-learned and self-developed by Lili herself, since her father, who loathes violence, would probably never allow her to even practice any sort of formal martial arts training. This is probably why some of Lili's moves often reflect her background and personality. However, there is a trade-off from her graceful moves: speed. Her speed is below average and her moves take some time to execute, but this is not to say that she difficult to use. Lili is an easy character to master, and timing is the key to utilize her moves effectively.