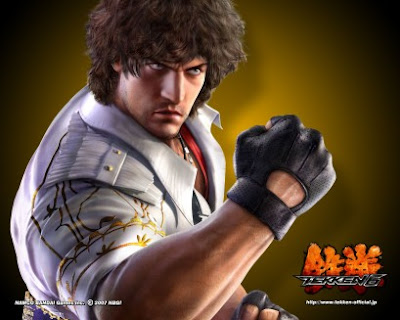 Miguel is a fictional character in the Tekken fighting game series. Along with Zafina, Leo, and Bob, Miguel is one of the new characters that was first introduced in Tekken 6. He also appears in Tekken 6: Bloodline Rebellion. Miguel will also return as a playable character in the upcoming Tekken Tag 2 Tournament. His full name is Miguel Caballero Rojo. He was referred to as "Manly Man" before his real name was confirmed.

Despising the thought of having his life in the hands of other people, Miguel sought to live it on his own. Even after being raised by strict parents, his bloodthirsty personality found him starting fights with people around him and caused him to be seen as a rebel. Countless arguments with his parents forced Miguel to leave home at the age of 15, but he soon found sanctuary at a bar he visited often. He trusted no one except his kind-hearted sister whom he cared about more than anyone. She visited him secretly without their parents knowing about it. Some time later, Miguel’s sister told him that she was to be married. Miguel, being outraged by this, thought of killing her fiance. Not wanting to break his dear sister's heart, Miguel decides against it.

Miguel is portrayed by Roger Huerta. He is the only Tekken 6 character to appear in the film, and is renamed "Miguel Rojo". He participates in the Iron Fist tournament and faces Jin Kazama. Despite holding his own rather formidably, he is defeated by Jin when he crushes his leg and is beaten unmercifully, nearly killing him.

Nothing much is known of Miguel yet, as he has only been featured in the last two recent Tekken games. He is a rather blood-thirsty and rebellious character, whose reckless nature can be seen as both his weakness and his strength.

Miguel is depicted as an undisciplined Spaniard with a very intense passion for fighting, which often brought him into conflict with others. Despite being born in a conservative family, his wild and unruly nature made him the black sheep.

Despite his negative side, Miguel is shown to be capable of love, especially in the case of his sister, whom he grew to trust and treasure. However, Miguel’s extreme over-protective concern for his sister made him consider killing his future brother-in-law, though he decides against it for the sake of her happiness. Miguel has also been frequently described as the "manliest man" in the series due to his big, towering figure and his oppressive aura of anger and power. Most of his customization options feature the theme of manliness, like muscle shirts, unzipped leather coats, and facial hair, and his outfits prominently feature his muscular and chiseled figure.

NAMCO stated that Miguel has no formal martial arts training and that he does not use or follow any formal style or discipline. Instead, he brawls his way out of any fight. Making use of his brutal strength and raw muscle-power, his self made "style" confuses and disorients opponents with wild, powerful blows.