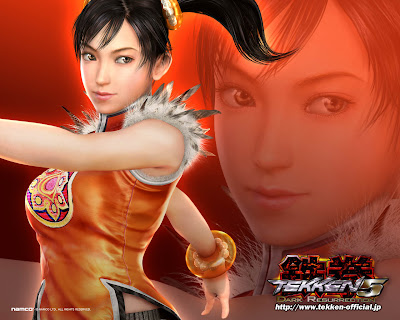 Ling Xiaoyu (born June 9, 1989) is a fictional Chinese character from the popular Tekken video game series. She attends the Mishima Polytechnical School with Jin Kazama (whom she has a crush on) and her friend Miharu Hirano. Her life’s ambition is to build an amusement park for all of China to enjoy. Since Xiaoyu has been voiced by Japanese voice actress Yumi Touma since Tekken 3, Xiaoyu speaks only in Japanese despite being Chinese, even to her grandfather, Wang Jinrei, in an interlude in Tekken 5 and Tekken: Dark Resurrection. Outside of the main series, Ling Xiaoyu has appeared in Tekken Card Challenge, Tekken Tag Tournament and Tekken Advance. Xiaoyu also appears in Smash Court Tennis Pro Tournament 2 as an unlockable character.
Even at 7 years old, Ling Xiaoyu loved amusement parks. She was tutored in martial arts by Wang Jinrei from a young age. He believed that if she were more serious, she could achieve true greatness, but he became frustrated by her careless attitude. 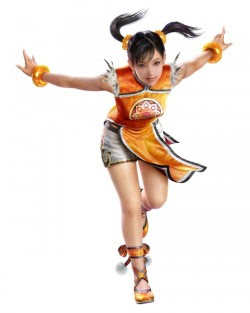 While vacationing in Hong Kong with her family, she noticed a yacht bearing the name: “Mishima Zaibatsu”. Knowing that the Mishima Zaibatsu was rich and powerful, she decided to seek out Heihachi Mishima and make her dream a reality. Abandoning her family, Xiaoyu stowed away on the ship. The ship’s security soon discovered her and informed Heihachi of her presence. By the time that Heihachi arrived on the scene, all of the Tekkenshu—Heihachi’s personal security force—that were aboard the ship had been beaten into unconsciousness and strewn about the deck. It looked as if the ship had been hit by a hurricane.

Amidst the chaos, Heihachi found Xiaoyu. She threatened to beat him up if he did not accept her challenge. Amused by her juvenile antics, Heihachi roared with laughter and promised to build her theme park if she won his tournament. She enrolls at the Mishima Polytechnical School, and this is where she first meets both Jin Kazama and Miharu Hirano. Bringing along her old school's trained panda (aptly named "Panda"), Heihachi teaches her to fight, much like he has taught Kuma, so that Xiaoyu would have a bodyguard. This inspired Xiaoyu to see Heihachi as something of a grandfather toward her.

As of Tekken 6, she now shares common intentions as Jun Kazama (except with Kazuya) in saving Jin from evil and from his hatred of his grandfather, Heihachi. Since Tekken 4, her goals center around Jin Kazama. Her crush for Jin Kazama has grown since they were students.
Posted by bluedreamer27 at 6:13 PM