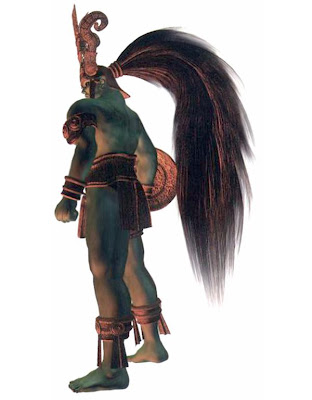 Ogre who also goes by the name Toshin in Japanese and known as The God of Fighting by the ancient Aztecs, is a fictional character in the "Tekken" fighting game series. He is the main antagonist and the final boss of Tekken 3. When defeated, he transforms into the game's final boss, "True Ogre," by absorbing the ki of either Heihachi Mishima or Jin Kazama.

Ogre's first form resembles a tall, muscular humanoid with dark green skin. It wears various types of Aztec jewelry and a large golden helmet/headdress with long purple hair. It also has a small round shield attached to its left arm (The character Devil Jin, can wear this item in the customization feature in Tekken 5).

Ogre's second form (True Ogre), stands not much taller than its first, but is hunched over to an extent. In this incarnation it barely resembles a human, with a large frame, dark brown fur, a monstrous face, a tail, wings, horns, and a snake in place of a right arm. All of the jewelry Ogre wore in its previous form disappear, save for one leg armlet. Also, in this form, the area surrounding him will become pitch black (In Tekken 3), or extremely dark (In the arcade version of Tekken Tag Tournament). Ogre's third form (From Tekken 5's Devil Within mode), is less of a drastic change from its first to second, but is much larger overall, appearing to be several stories high. In this form it is a golden and aqua color, and more closely resembles a large dragon or dinosaur. It features many more horns aligning its limbs and elongated head, and also has four large spikes protruding from the sides of its mouth. It is still unknown whether the events in "Devil Within" are part of Tekken canon or not.

Ogre's fighting style in its first two forms are a combination of seemingly random moves from various other Tekken characters. He has many moves from characters such as Wang Jinrei, Bruce Irvin, Jun Kazama, Kazuya Mishima, Armor King, Anna Williams, Kuma, Baek Doo San and Jack. It has two unique moves. The first one is called "Serpent's Venom", and the second one is called "Ancient Power", which acts like a counter move.
Posted by bluedreamer27 at 12:03 AM

Email ThisBlogThis!Share to TwitterShare to FacebookShare to Pinterest
Labels: Ogre, Tekken, The God Of Fighting, Toshin