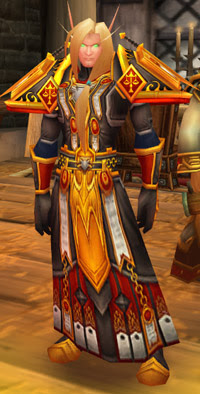 Arator the Redeemer or Arator Windrunner is the half-elven son of the high elven ranger Alleria Windrunner and the human paladin Turalyon. He can be found in Honor Hold in Outland's Hellfire Peninsula.

Arator was only a child when Turalyon and Alleria accompanied Archmage Khadgar beyond the Dark Portal as part of the Alliance Expedition to Draenor. He was apparently well-known by members of the Expedition, including Danath Trollbane, who called him "Little Arator". Turalyon and Alleria, along with the rest of the Expedition, were believed to have died when Khadgar sealed the Dark Portal. Twenty years later, Lord Kazzak reopened the Portal and crossed over into Draenor, now known as Outland. Arator, who has grown up to become a paladin in his father's footsteps, accompanied the Alliance reinforcements from Stormwind and Nethergarde to Honor Hold, where he remains as he searches for his missing parents.

Arator is one of the few known half-elf characters and the only known in-game half-elf (as Kalec is actually a dragon). Ironically, as the son of Alliance-loyal Alleria, he is the nephew of Horde leader Sylvanas Windrunner. (Although Sylvanas was at one time loyal to the Alliance)

He had green eyes like his mother Alleria, and many other half-elves. However as of Patch 3.1, his eyes are blue similar to normal high elves.

Interestingly enough, there is no mention of him in the novel Beyond the Dark Portal, even though his parents' relationship is explored in detail. It is possible that his birth has been retconned to after the expedition lost contact with Azeroth, but this would mean that Arator grew up in Outland, directly contradicting his own words. Another possibility is that Alleria chose not to tell Turalyon of their half-elf son and abandoned him in someone else's care, likely because of the facts that not only were she and Turalyon estranged at the time, but that she was in a near-suicidal frenzy due to the Horde butchering most of her family and her overwhelming desire for revenge upon them.
Posted by bluedreamer27 at 9:05 PM