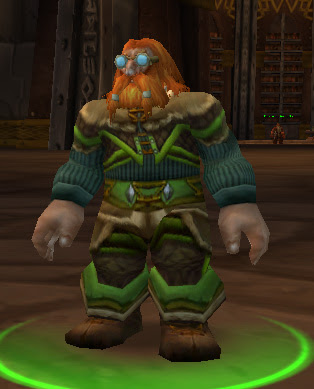 Muninn Magellas (sometimes spelled Munnin Magellas) is a level 60 Bronzebeard dwarf quest giver located in the Library in the Hall of Explorers in the dwarven city of Ironforge. He is affiliated with the Explorers' League Muninn Magellas has had an insatiable curiosity for history and arcane since he was a small boy. Back during the Second War, the intellectual dwarf named Munnin Magellas, had a vision of discovering the world’s and the dwarves secrets. It was his vision and drive that led to founding of the Explorers’ League. Now, as the patron of the Explorers' League, his childhood wish has come true. Magellas is responsible for mapping out the world and cataloging its various species, relics, and treasures for generations to come. Like King Magni, Magellas was grieved to hear of Brann's disappearance. Nevertheless, he is committed to steering the Explorers' League and gaining valuable insight on the mistakes of the past. He employs a small army of prospectors, and has sent his agents all over the world to gain knowledge and insight for his people.
Muninn Magellas is likely named for Muninn, one of the ravens of Odin in Norse mythology, and the famous explorer Ferdinand Magellan.
Posted by bluedreamer27 at 5:01 PM