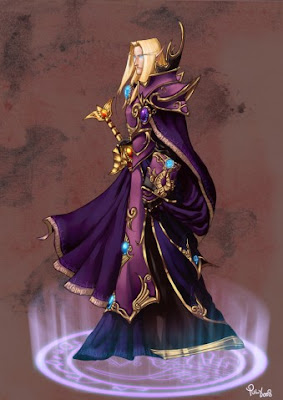 Kael'thas "Kael" Sunstrider was a senior member of the Kirin Tor and the Prince of Quel'Thalas, the last of the Sunstrider dynasty. After the fall of Quel'Thalas, Kael'thas led what remained of his people in the service of the Alliance. Striving to placate his people's addiction to magic, he later covertly allied with Illidan Stormrage and the Burning Legion. He was branded a traitor after his allegiance with the Legion was revealed. Kael'thas plotted to summon Kil'jaeden the Deceiver through the Sunwell, but his plans were foiled by the Shattered Sun Offensive. He was defeated by their forces in Magisters' Terrace.

Kael'thas is voiced by Quinton Flynn in World of Warcraft: The Burning Crusade and Warcraft III: The Frozen Throne. Prince Kael'thas was a powerful mage and member of the Six, the shadowy high council of the Kirin Tor. Prior to the Second War, he and the other members of the high council questioned Khadgar about the orcs and the events in Karazhan that led to the death of Medivh. 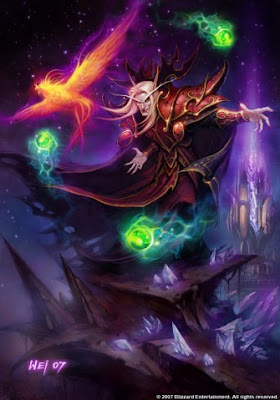 It has been speculated, based on the similarities between their names, that Kael'thas could be Archmage Aethas Sunreaver in disguise, but of course this is unlikely, seeing as players kill him and turn in his head. That being said, Kael would not be the first to survive such an experience, given that Zalazane on the Echo Isles was allegedly beheaded by players multiple times, where in reality it was all a ruse.
All he feels now is hatred for the undead that ravaged his homeland, rage for the Alliance he feels failed his people, desperation over his people's collective addiction to magic, and grief for his ravaged kingdom. However, he is proficient in siphoning magical energies from demons to feed his addiction and has taught his brethren to do the same. Lately his hunger for magic has clouded his judgment. Kael'thas, though judged and seen as a madman, is merely a misguided leader, who will stop at nothing to save his people, even if that means the slaughter of his former followers and allies.
Kael'thas, as the last known surviving member of the Sunstrider dynasty, is the heir to the high elven crown but has yet to take it. Instead, he styles himself as the "Lord of the blood elves".
Posted by bluedreamer27 at 5:55 PM