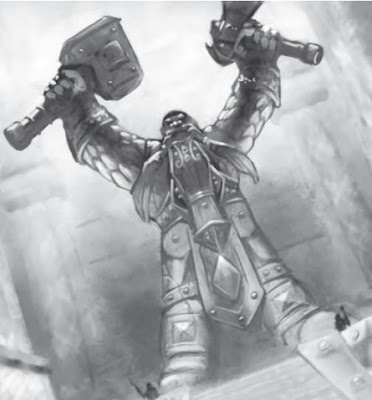 Modimus Anvilmar was the high king of all the dwarves. The Bronzebeard, Wildhammer, and Dark Iron clans were united under his rule. He had closest ties to the Bronzebeard clan by blood and history. When he died, the War of the Three Hammers began. It is possible that pieces of Modimus' hammer, Hammer of the High King, were obtained by each of the leaders of the three major dwarf clans sometime after or during the War of the Three Hammers. The Bronzebeards kept the head intact missing its crystal which the Dark Irons put at the head of a staff while Wildhammers turned the handle into a scepter. However, the document that supposedly asserts this appears to be a fake.

Anvilmar, the town in the Coldridge Valley where dwarf and gnome adventurers begin their quests, is named after him.

The mighty statue of King Anvilmar is found at the city gates of Ironforge. It is a massive statue nearly 100 feet high. The dwarf depicted there wore intricate chain armor and held two great hammers on high. His mouth was open in a soundless battle-cry.. His statue can also be found in the Iron Dwarf city of Thor Modan.