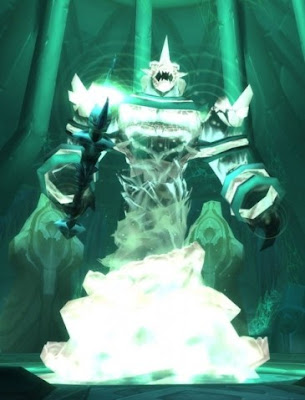 Murmur is the fourth and final boss of Shadow Labyrinth, an instance wing of Auchindoun. It bears an appearance similar to Ragnaros and Thunderaan. Before Ahune's appearance, it was the only elemental with Elemental Lord status in Outland.

Murmur is an incredibly powerful elemental born when the Universe was created, about whom little is known. The Shadow Council inhabiting the Shadow Labyrinth summoned it for their nefarious purposes, but seem to be having trouble keeping it under control. Its history is briefly documented in the Codex of Blood, which reveals Murmur is the primordial essence of sound.

The fight versus Murmur is relatively easy when everyone understands their role in the fight. No resistance gear is required.

Murmur starts with 40% health, which is a total of around 169k. Murmur is stuck to the place just like Ragnaros and he has an aggro range of 10-15 yards. Additionally, he uses a powerful ranged attack if there are no possible melee targets.

The main tank will run in and get aggro while the rest of the group spreads out at maximum spell/attack range to avoid extra damage from the AoE explosion from the Touch of Murmur effect.

Periodically, Murmur will pulse and emote. At this point, he will stop attacking, and the tank and any melee will need to run out of the circle around him, or they will be hit by his Sonic Boom. Warriors should Intervene to someone standing outside the ring. This will almost guarantee no damage from Sonic Boom. The tank will then need to get back in range immediately.