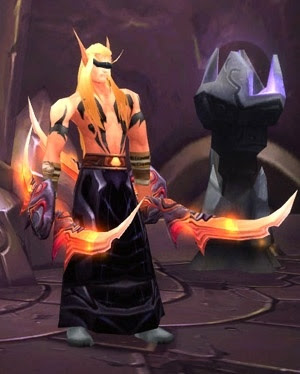 Varedis is an Illidari Demon Hunter who can be found inside the Ruins of Karabor in Shadowmoon Valley. He runs the training grounds for future demon hunters.

According to Altruis the Sufferer, Varedis was one of five warriors sent to Illidan by Kael'thas to be trained as demon hunters - the first time that blood elves were allowed to do so. Illidan put the blood elves through excruciating trials that would have defeated most fully trained demon hunters. Three of the blood elves died during the training, and a fourth was driven to insanity. Varedis was the only one to succeed.

Varedis turned out to be something of a prodigy; not only had he succeeded in his training, but he was displaying better command of his powers than many veteran demon hunters. Illidan saw the great potential in him and assigned three master demon hunters to train him further. Within a year, Varedis had surpassed them. Still seeking more, Varedis infiltrated the Shadow Council and learned of the Book of Fel Names, a tome said to contain the true name of every demon in existence. His power may be connected to the book, as ripping the pages from it takes some of his power away.

When Varedis returned to the Black Temple, Illidan placed him in charge of training additional demon hunters at the Ruins of Karabor
Posted by bluedreamer27 at 9:02 PM