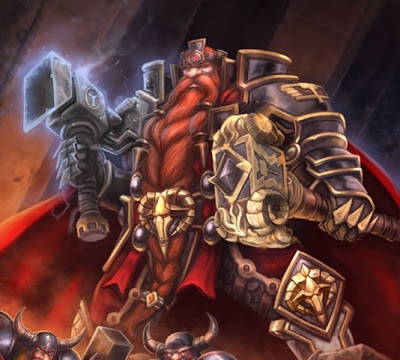 Magni Bronzebeard is the King of the dwarven kingdom of Khaz Modan, Thane of Ironforge, head of the Bronzebeard Clan, and head of the Senate of Ironforge.
The eldest of the three Bronzebeard brothers, Magni was destined to be the king under the mountain. Strong of arm and keen of mind, Magni loved his two brothers above all else in the world. From the time of his youth, Magni the prince was keenly aware of what would be expected of him in the future. This apparently intimidated him and he questioned if he could be the kind of leader Ironforge needed. He even privately wished that his father and brothers would outlive him, and thus their people would have a good king. To look upon the tower of strength and effective leader that King Magni is today, one can scarcely imagine that he was ever a prince full of doubt. 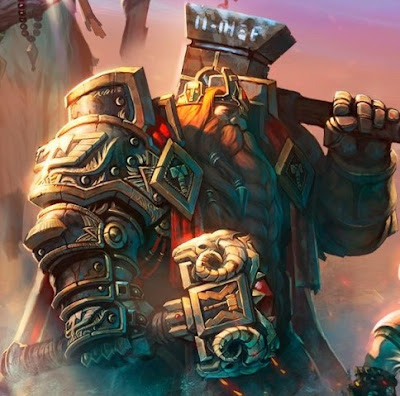 King Magni has several nasty abilities at his disposal including a powerful Thunderclap, Charge, and a massive knock back. In addition, he can launch players into the air, transform into an Avatar which increases his damage and armor, as well as summon guards to aid him. When his health drops low he heals himself by using an ability similar to Lay on Hands. Because Magni has a relatively small aggro range, 1 healer can drink and resurrect dead players while other still fight Magni.

In the Norse mythology, Magni is one of Thor's two sons, and one of the few gods who will survive the Ragnarok, and who will wield (along with his brother, Modi) his father's legendary hammer Mjolnir after Ragnarok.

Magni holds the title as King under the Mountain which is a reference to Tolkien's Middle Earth, where the dwarven rulers of the lonely mountain of Erebor was called by the same title. It should also be noted that Ironforge has some resemblance to how the mountain of Erebor is described in Tolkien's books.