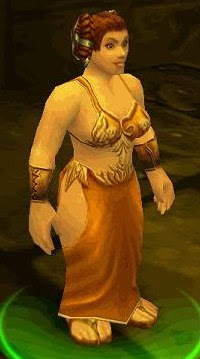 Moira Bronzebeard is the daughter of King Magni Bronzebeard of Ironforge. Her father maintains she was captured and seduced via magical means by Emperor Dagran Thaurissan and became pregnant with his child. This child is half Bronzebeard and half Thaurissan, and the heir to both the Kingdom of Ironforge and Dark Iron clan.

Moira Bronzebeard is located in the Imperial Seat in Blackrock Depths. She assists Thaurissan by healing him, so its wise to keep her CC'd by Sapping/Freezing Trapping her (she cannot be polymorphed). Both the Alliance and Horde get a quest completed by killing Thaurissan first, and talking to Moira after. However, Moira can still be taken down for her loot before Thaurissan falls. Once your group has done that quest, High Priestess of Thaurissan will replace her on subsequent trips to the dungeon.