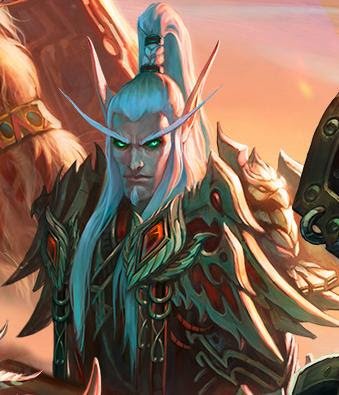 Lor'themar Theron is the Regent Lord of Quel'Thalas, and was the leader of the blood elves of Azeroth in the absence of Prince Kael'thas Sunstrider. After Kael'thas' betrayal and eventual death, Lor'themar has become the sole leader of his people and seeks to lead them to a brighter future. In the Second War, Lor'themar was second-in-command to Sylvanas Windrunner, Ranger-General of Silvermoon, he defended Quel'Thalas against the invasion of the Horde, then he accompanied Turalyon and the Alliance forces to Capital City and helped them to defend themselves against the orcish threat.
Many years later the traitorous Prince Arthas, having already ravaged his own homeland, the Kingdom of Lordaeron, led the undead Scourge against the high elves. The Ranger Corps fought Arthas at every turn but were pushed further and further back towards their capital. Sylvanas Windrunner was slain by Arthas outside Silvermoon, the city was sacked, and King Anasterian and the entire Convocation of Silvermoon were killed battling the invading undead. After Sylvanas' death, Lor'themar assumed temporary leadership of the high elves and, along with his much-reduced forces, remained in Quel'Thalas after the fall of Silvermoon as a resistance to the Scourge remnants.

Lor'themar, Rommath and Halduron's close proximity to one another can be misleading as well as intimidating for a small raid. Rommath is of no real threat to the raid, seemingly unbuffed since Lich King went live, he still uses no abilities at all and can be just tanked to the side during the fight. Halduron is a bit tougher and uses a few moderately powerful abilities but is easily dispatched only having half the health pool of Rommath.

It's good for a tank to hold Lor'themar with two to four healers depending on gear, all mana users should be standing more than 30 yards away to avoid Lor'themar's Mana Burn ability. This fight is the apex of a DPS race in terms of Alliance PVP, Horde players from The Undercity, Dalaran, and Shattrath are capable of teleporting en masse directly to Sunfury Spire and thrashing even a large raid, CCing and picking them off can sometimes doom a raid due to lack of DPS on Lor'themar. That said it's best for players to start using AOE abilities if the Horde attempt to intervene. PVP trinkets are a must for this fight in order to deal with Lor'themar's Mass Charm spell.

With luck, subtlety, and enough concentrated DPS Lor'themar will fall, from there the raid has done it's job, if they are capable of killing whomever remains the raid can see a good sum of gold depending on the number of players.