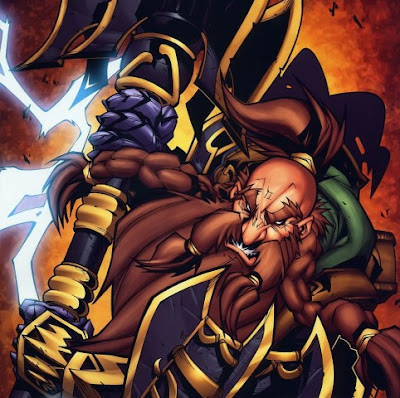 Thargas Anvilmar is an Ironforge dwarf in service of king Magni Bronzebeard and has fought shoulder to shoulder with King Varian.

Anvilmar is also featured in DC Unlimited's World of Warcraft: Series 1 action figure set, where he appears to be wearing Destroyer Armor.

Thargas Anvilmar was sent by King Magni Bronzebeard to meet Varian Wrynn, Valeera Sanguinar and Broll Bearmantle at Menethil Harbor without knowing who they really were. After they landed, Thargas followed them to an inn where he helped the three companions fight a band from the Defias Brotherhood. He then told Varian and his friends about another "King Varian" who has returned to Stormwind.

When Thargas, Varian, Broll Bearmantle, and Valeera Sanguinar were travelling on their way to Ironforge they were attacked by a group of Dark Iron dwarves. When the heroes defeated them; their leader, Gunnar Flyntrock, told Thargas that his brother, Hjalmar Anvilmar, was captured by the Dark Iron dwarves at Thandol Span. The company then decided to go and rescue him. 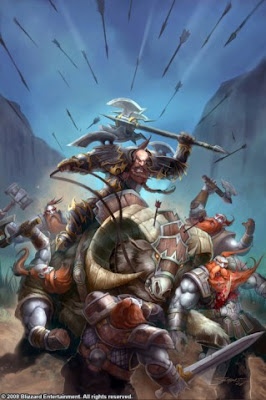 At Thandol Span, they found Hjalmar held captive by Dark Iron dwarves under the command of Balgaras the Foul. Balgaras intended to kill Hjalmar by melting the Helm of the Anvilmars onto his face. However, Thargas cut his hand off before he could cast a fire spell, and Hjalmar was thus set free. With his other hand Balgaras tried to light one of the explosives, Hjalmar jumped to prevent it, and was mortally injured by the explosion. Before he died, he gave the Helm of the Anvilmars to Thargas telling him to save Thandol Span. In Hjalmar's name, Thargas killed many Dark Irons and helped save the span.

Afterwards, Thargas joined Varian's group and aided him in driving off Onyxia from Stormwind and assaulting Onyxia's Lair. After Onyxia was slain, Thargas departed with the Stormwind soldiers who were returning to the Eastern Kingdoms so that he could sort out the affairs involving his brother's death and his own estates. Varian thanked Thargas for his aid and friendship and told him that Anvilmar could always count on Stormwind as an ally.

Thargas will make his first World of Warcraft appearance as a quest giver in Cataclysm, sending adventurers to help in defending the Thandol Span and retaking Dun Modr.
Posted by bluedreamer27 at 5:08 PM