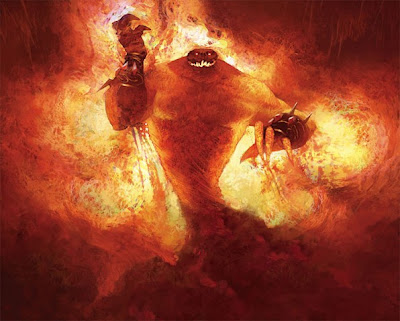 Baron Geddon is a fire elemental boss found in the Molten Core. He patrols near Shazzrah's spawn area while guarding the Rune of Zeth.
Baron Geddon is one of the eldest of all fire elementals, and he served as Ragnaros’ right hand during the beginning of the war against the titans. During one of the first battles against the then-unknown titan attackers, Geddon was defeated and forced into humiliating retreat. Ragnaros immediately demoted his commander, thinking that Geddon had been defeated by an inferior foe, since the Old Gods and their lieutenants had never yet met a challenge. His replacement was the flamewaker Majordomo Executus; Geddon was infuriated that a creature not purely of fire replaced him, a noble among the elementals. In an effort to regain his master’s faith, Baron Geddon planned the now legendary betrayal of Thunderaan the Windseeker. In the midst of a great battle, Geddon separated the massive lightning elemental from his allies, and together with Garr and Ragnaros, they ambushed the great elemental in an effort to steal his power.
His appearance is a vaguely humanoid upper torso composed of pure flames. He is bound at what might be his wrists by two thick metal bracers. The lower portion of his body is a whirlwind of spinning flames that barely touch the ground. Baron Geddon opens combat using ignite mana on any obvious powerful spellcaster. He continues doing so until forced into melee or until every powerful spellcaster is under the influence of ignite mana. Baron Geddon then uses inferno to drive away nearby attackers, to a (presumably) safe distance. He uses living bomb on anything he can target until once again engaged in melee. Baron Geddon stays mobile, moving around with Spring Attack to keep his foes from bringing all of their melee to bear on him. He repeats the cycle — inferno, living bomb, and melee — whenever his foes get too close. He refreshes ignite mana when he suspects it has been dispelled. Baron Geddon can intensify the heat of his body to the point where flames erupt all around him. Baron Geddon can turn creatures into living bombs. The creature starts building up elemental energy and can feel the heat rising inside itself. If the effect is not dispelled, the creature explodes in flames, damaging those around him.
Posted by bluedreamer27 at 5:40 PM

Hi,Thanks for leading me to your Blog from a comment left on my Blog, some great stuff here, will bookmark it, Thanks again!