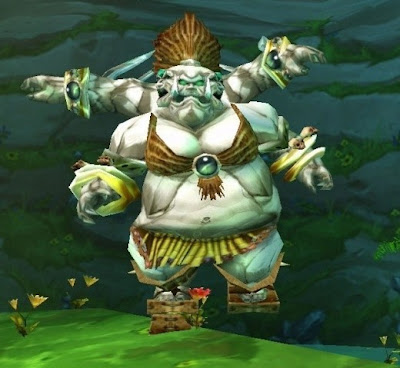 Deep in Maraudon lives an evil creature of chaos. Princess Theradras is an elemental force of earth related to the Old Gods, a daughter of Therazane the Stonemother. Ages ago, Theradras and Zaetar, first son of Cenarius, began a relationship. The offspring of their time together became known to the people of Kalimdor as centaurs, who promptly slew their father for his part in their misbegotten creation. Fearful of Cenarius' wrath, the grief-stricken Theradras sequestered her dead lover's body in her secret sanctuary, the Crystal Caverns of Terramok, where she watches over him to this day. Travelers who come to Desolace have little trouble spotting Zaetar's tomb, for the blessing of nature that permeates his being transformed his resting place into a verdant paradise of flora and tranquil pools. Today, this tomb is now trodden by the hooves of Zaetar's children, who have claimed this great cavern as their sacred stronghold Maraudon. The subterranean tunnels are populated by the vicious, long-dead ghosts of the centaur Khans, as well as Theradras' own raging, elemental minions. She become the earthlord of the elementals attacking Orgrimmar and Ironforge then became known as Crown Princess Theradras. She is always at the same place in Maraudon. The Horde and Alliance's players are able to fight her after the secure of a capital during the 30 minutes.
It is definitely better to have two tanks for Princess Theradras herself. She fears and has a knockback which throws whoever has aggro roughly 20-30 yards. Also, she occasionally slams the ground which send out waves dealing about 150 damage (for each wave) and knocking everyone down for several seconds, so you must keep her away from casters or their spells will be interrupted during this AoE knockback. If you have a priest, put Fear Wards on your tanks. When she throws back one tank, everyone else stops what they are doing until the second tank establishes aggro. Rogues will not cut it as off-tanks, she hits too hard, and your healer will have to spam heals. If you do only have one available tank, a common strategy is to have them back up into the water towards the walls. When she knocks the MT back, they should be positioned to rebound off the wall and come right back to her.
Posted by bluedreamer27 at 5:50 PM