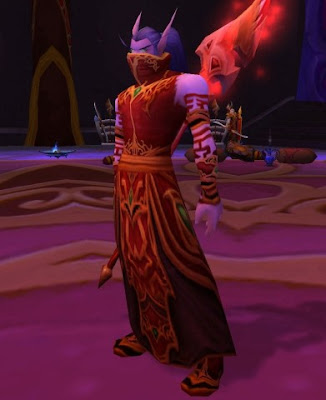 Grand Magister Rommath is the leader of all blood elf magi on Azeroth, and a fiercely loyal servant of Kael'thas Sunstrider.

Since his return as the prince's Herald, Rommath has founded a new order of Blood Magi to help the blood elf people reclaim their homeland. Under his command, this new order has used unprecedented magics to rebuild Silvermoon City almost overnight, and reclaim the lands surrounding the city from the taint of the Scourge.

Though it was widely speculated whether Rommath's loyalty to his prince was greater than his love for his people, he ultimately remained loyal to Silvermoon City when Kael'thas and his felblood elves attacked, suggesting that he was likely unaware that Kael'thas was serving a more sinister master. Rommath holds a position of honor in Silvermoon City, and resides inside Sunfury Spire with Lor'themar Theron and Halduron Brightwing.

Grand Magister Rommath plays a part in the restoration of Quel'Delar and is seen at the restored Sunwell. After Lor'themar attempts to take Quel'Delar from non-blood elf players only to be rejected by the sword Rommath protects players from the guardians in an ice tomb and informing the guards of the Regent Lord's mistake in grabbing the sword. After being released he allows players to take Quel'Delar and leave the Sunwell.