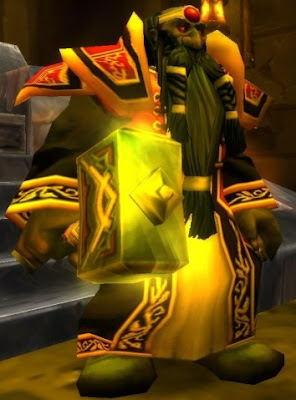 Dagran Thaurissan is the current ruler of the Dark Iron clan, a descendant of Emperor Thaurissan and Modgud. Even as the leader of his clan, he is, like all Dark Iron dwarves, a servant of Ragnaros. The Emperor rules his people not from the city founded by (and named for) his ancestor, but rather from the depths of Blackrock Mountain near the entrance to Ragnaros's domain, the Molten Core. The Emperor's Dark Irons swarm the depths of Blackrock Mountain, and have also been seen in the Searing Gorge to the north and the Burning Steppes to the south. He has also sent his emissaries and agents to the gnomish capital of Gnomeregan, apparently in an effort to back the self-proclaimed ruler of Gnomeregan, Sicco Thermaplugg.

The Emperor seduced King Magni Bronzebeard's daughter, Princess Moira Bronzebeard, and she is now pregnant with his child, who is half Bronzebeard dwarf and half Dark Iron dwarf, and the heir to both thrones of Shadowforge and Ironforge.

It is revealed in The Shattering: Prelude to Cataclysm that King Magni Bronzebeard sent a team to kill Emperor Thaurissan, and retrieve the previously thought to be ensorcelled Moira back to Ironforge. Yet Moira refused to come home and announced that she was pregnant, and that the death of her husband has left a terrible, fiery rage within her heart.

Dagran currently wields the legendary hammer Ironfoe, but not by legitimate means. The hammer's hereditary owner, Reginald Windsor was captured and imprisoned by the Dark Irons, his weapon claimed by Dagran.