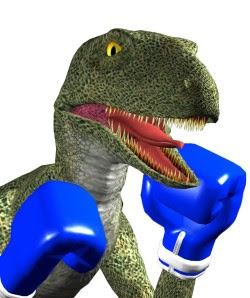 Alex is a palette swap for Roger in Tekken 2 and Tekken Tag Tournament, sharing his moves and win animations.
Alex is a cloned Dromaeosaurid made from a fossil by Doctor Boskonovitch during Kazuya Mishima's tenure as the head of the Mishima Zaibatsu. Alex appears to have been trained in their fighting art by Armor King.
He has only made one appearance in the main storyline, being Tekken 2. Alex studies a fossil that he has discovered, then runs and throws a punch in the air. To fight him is necessary to win Stage 3 winning the match with very little health remaining in the final round you fight. If your character has been selected with one of kick buttons, he will be your opponent at Stage 4, otherwise it will be Roger.
Posted by bluedreamer27 at 10:43 AM