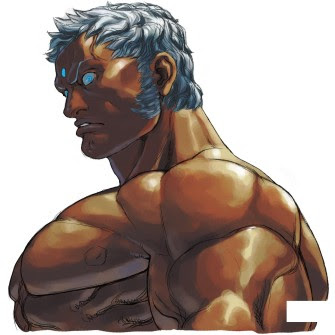 Urien is a character in the Street Fighter series. He first appeared in Street Fighter III: 2nd Impact and is voiced by Yuji Ueda in it and voiced by Lawrence Bayne in 3rd Strike. Urien is the inferior brother of Gill and tried to claim the leadership of his organization, the Illuminati. When he finally succeeded, he learned that there was an Emperor outranking him, his brother Gill. Now Urien still longs to overthrow Gill by creating his own army with the G-Project. He kidnapped one of the children Chun-Li looks after so she could get back in shape.

Urien (like Gill, his brother) is dressed like an ancient Greek Olympic athlete, wearing only a white loin cloth, although he is shown lighter-skinned and wearing business attire during the character introduction that precedes every match in Street Fighter III; his clothes shred and fly off, his skin darkens to a bronze complexion, and his hair turns from blond to metallic white before beginning his fight. Strangely enough, he has an appearance similar to that of Yashiro Nanakase of the King of Fighters series.
While his brother wields fire and ice, he can wield lightning and make his body metallic. Aside from a few exceptions, Urien has virtually the same move list as Gill, except that much of the input motions for performing the techniques are different. Unlike Gill, some of Urien's special moves are "charge" moves, thus forcing the player to work around the necessity for charge times. Urien also does less damage than his boss counterpart. Urien's moves tend to be named after Roman/Greek influences such as Spartan Bomb, Aegis Reflector, Chariot Rush, and Temporal Thunder.
Posted by bluedreamer27 at 11:21 AM